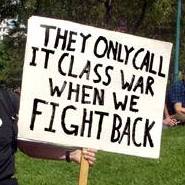 Writer, war correspondent, religious scholar, Chris Hedges has become increasingly radicalized over the past dozen or so years although he would argue it's society that has truly changed, particularly through the influence of religious fundamentalism and the capture of political power by the forces of corporatism.  Whatever the balance of changes and forces, he's calling for revolution as the last hope.

Corporations write our legislation. They control our systems of information. They manage the political theater of electoral politics and impose our educational curriculum. They have turned the judiciary into one of their wholly owned subsidiaries. They have decimated labor unions and other independent mass organizations, as well as having bought off the Democratic Party, which once defended the rights of workers. With the evisceration of piecemeal and incremental reform—the primary role of liberal, democratic institutions—we are left defenseless against corporate power.

A handful of corporate oligarchs around the globe have everything—wealth, power and privilege—and the rest of us struggle as part of a vast underclass, increasingly impoverished and ruthlessly repressed. There is one set of laws and regulations for us; there is another set of laws and regulations for a power elite that functions as a global mafia.

We stand helpless before the corporate onslaught. There is no way to vote against corporate power. Citizens have no way to bring about the prosecution of Wall Street bankers and financiers for fraud, military and intelligence officials for torture and war crimes, or security and surveillance officers for human rights abuses. The Federal Reserve is reduced to printing money for banks and financiers and lending it to them at almost zero percent interest; corporate officers then lend it to us at usurious rates as high as 30 percent. I do not know what to call this system. It is certainly not capitalism. Extortion might be a better word. The fossil fuel industry, meanwhile, relentlessly trashes the ecosystem for profit. The melting of 40 percent of the summer Arctic sea ice is, to corporations, a business opportunity. Companies rush to the Arctic and extract the last vestiges of oil, natural gas, minerals and fish stocks, indifferent to the death pangs of the planet.

...The airy promises of the market economy have, by now, all been exposed as lies. The ability of corporations to migrate overseas has decimated our manufacturing base. It has driven down wages, impoverishing our working class and ravaging our middle class. It has forced huge segments of the population—including those burdened by student loans—into decades of debt peonage. It has also opened the way to massive tax shelters that allow companies such as General Electric to pay no income tax. Corporations employ virtual slave labor in Bangladesh and China, making obscene profits. As corporations suck the last resources from communities and the natural world, they leave behind ...horrific human suffering and dead landscapes. The greater the destruction, the greater the apparatus crushes dissent.

More than 100 million Americans—one-third of the population—live in poverty or a category called “near poverty.” Yet the stories of the poor and the near poor, the hardships they endure, are rarely told by a media that is owned by a handful of corporations—Viacom, General Electric, Rupert Murdoch’s News Corp., Clear Channel and Disney. The suffering of the underclass, like the crimes of the power elite, has been rendered invisible.

...It is time to build radical mass movements that defy all formal centers of power and make concessions to none. It is time to employ the harsh language of open rebellion and class warfare. It is time to march to the beat of our own drum. The law historically has been a very imperfect tool for justice, as African-Americans know, but now it is exclusively the handmaiden of our corporate oppressors; now it is a mechanism of injustice. It was our corporate overlords who launched this war. Not us. Revolt will see us branded as criminals. Revolt will push us into the shadows. And yet, if we do not revolt we can no longer use the word “hope.”
Posted by The Mound of Sound at 9:49 AM

I love Hedges I really do but surely he knows he's whistling into the wind.

The "greatest nation in the history of the world" inculcation begins just after birth and forms an almost impermeable membrane by the age of 8.

The possibility of a revolt in the USA is as close to nil as to be indistinguishable from impossible.

As it is in most of the western world really. Can anyone imagine Canadians even marching in the streets in sufficient numbers to cause concern? Let alone swarming the streets armed with sticks and bricks in open revolt?

You said it yourself http://the-mound-of-sound.blogspot.ca/2013/05/the-road-back-if-were-brave-enough-to.html

And if something resembling a revolt should begin to gain momentum it will be co-opted and turned into a fashion statement.

Which can then be turned on it's head and changed for the next fashion.

How many more years of heavy drought in the U.S. south, how much more sea level rise and storm surge damage, can the U.S. bear before it has to begin dealing with large-scale internal displacement? These are powerfully destabilizing forces that really aren't in our contemplation when we think of social tranquility.

As a civilization we're running into walls all over the place today, Dana. A third of Americans effectively living in poverty. How did that ever happen in the "richest country in the world"? How long do you think that can last, how much can it worsen, before it sparks a response?

Oh I don't disagree about there being widespread social disintegration. Far from it.

But social disintegration and open revolt are very different animals.

For one thing revolt requires a certain amount of social *cohesion*. Like minded people coming together and forming a mutually agreed upon pact and plan of action. Hard to do in a disintegrating society that is already badly fractured and distrustful.

Revolt also requires some degree of widely acknowledged leadership. Disintegration doesn't make the emergence or wide acknowledgement of leadership either easy or likely.

I think eventually there will be anarchy. Not revolt.

Sometimes there is a fine line between anarchy and revolution. What matters is what happens after the Bastille has been stormed.

Dana makes some good points but revolution is normally the work of a fairly narrow band of middle class intellectuals and professionals. They do the initial heavy lifting only to get swept aside by the murderous horde that follows. That's when you wind up with "The Terror."

But the fact is we really don't have much precedent for what's coming because it is so widely focused with a variety of forces that will impact at unpredictable moments.

You can get a rough idea of what's coming but you're still going to be smacked in the head when it arrives.

Perhaps out of the chaos leadership will emerge and we will avoid the worst of anarchy. As Owen says, the line is easily blurred.

I hope something more humane eventually rises from the ashes but I have a grand fear that it is going to take a very long time.

Unless the ashes are toxic or radioactive.

Then all bets and predictions are off.