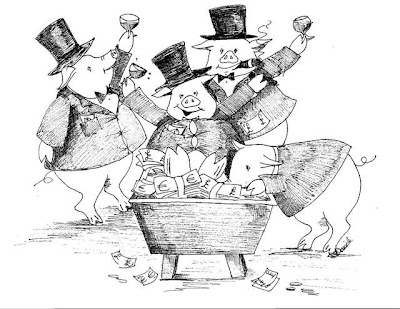 This could explain why the Prime Minister's Office told Duffy to refuse to cooperate with the forensic audit into his expenses.  Not only was Duffy pocketing tens of thousands of dollars in living expense allowances but he was also claiming expenses while on the campaign trail for the Conservatives.

The reason Sideshow Steve Harper appointed Duffy to the Senate, in addition as payment for services rendered during his last few years at CTV, was to serve as party pitchman at fundraisers from coast to coast.  A mutual friend used to regale me with details of how tirelessly Duffy worked, not for the country, not for the senate, but to improve Boss Harp's fortunes in the House of Commons.  The Senate job, it seems, was a handy vehicle to get Duffy onto the PMO payroll.  Apparently, "sober second thought" was optional.

Claiming reimbursement from the public purse for services rendered, not to the senate but to the Conservative Party of Canada, certainly does seem to cross a few lines, the sort of lines the RCMP would be interested in.  In times past that came under the heading of "pillaging the peasants."

I suppose ordering Duffy to stay silent was better than directing him to respond to auditors' questions by claiming the protection of the Canada Evidence Act - but only so long as he didn't blurt out the details to all his pals in Ottawa.

Duffy certainly was Steve Harper's invaluable little piggy at the trough.  But Steve, being Steve, doesn't do this sort of thing without cutouts, minions to fall on their swords, to preserve plausible deniability for the capo.

I wonder if Steve likes roast pork because Duffy set himself on fire and I think he's just about done.
Posted by The Mound of Sound at 5:54 AM

Perhaps the Duffer will wind up being Harper's Mcduff, Mound.

You could be right, Owen. Check out the follow up piece I just posted. My well positioned friend in Ottawa hints that this could be a set up to burn Duffy before others get singed.

The twists and turns in this story is a story in itself. Kudos!