The Science of Climate Change Denialism

Denialism as a science?   It could be a social science, the science of manipulating public consciousness to produce a predictable effect, the divergence of public opinion from fact.

What is denialism but a carefully researched, very refined and focused form of propaganda?   The Pentagon's DARPA, Defense Advanced Research Projects Agency, has launched a study into the neuroscience underlying propaganda, how people fall prey to indoctrination and the physical changes they undergo.

Existing technology can carry out micro-facial feature analysis, and measure the dilation of blood vessels and eye pupils. MRI machines can determine which parts of your brain is lighting up when it responds to stories. Darpa wants to do even better.

In fact, it’s calling for devices that detect the influence of stories in unseen ways. “Efforts that rely solely on standoff/non-invasive/non-detectable sensors are highly encouraged,” the solicitation reads.

In effect, propaganda messes with your mind - at least if you're susceptible to it.   And the denialism industry are past masters at the science of using propaganda to inculcate misconception.

An illustration of this emerged from a study released by Skeptical Science that found the scientific consensus supporting anthropogenic or man-made global warming at a solid 97% whereas public perception had just 45% believing that there was such a consensus.   How did 55% come to believe that the issue was still unresolved? 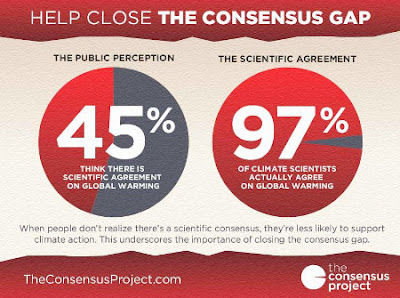 When the Skeptical Science study came out it was promptly engaged by the denialists employing the five techniques of denialism:

A 2009 paper published in the European Journal of Public Health by Pascal Diethelm and Martin McKee discussed five characteristics common to scientific denialism:

A detailed look at how each of these tactics was engaged is to be found in The Guardian.   These techniques, of themselves, probably aren't science, but the neuroscience that underlies them obviously is.

people gravitate to what they want to believe and dismiss everything they dont want to read/hear. Sad, the denial is costing this planet.


And alarmists gravitate to what they want to believe and dismiss everything they dont want to read/hear. Sad, they are costing this planet even more.

Klem, your position rests on the unrealistic proposition that climate change can be evaluated and debated in isolation. It can't. AGW is a component, a major part admittedly, of a matrix of events, conditions and threats that need to be considered collectively as well as individually.

Some of these other factors are visible to the naked eye from the ISS. Most of them are completely tangible, measurable, recordable. Here's a list, a partial list: severe storm events of increasing frequency and intensity; shifts in the planet's hydrological cycle resulting in both sustained and cyclical droughts and floods; the loss of Arctic sea ice giving rise to a powerful, polar jet stream and the development of Rossby Waves that impact the climate of the northern hemisphere; loss of biodiversity; species depletion and extinction, in particular the collapse of global fisheries; resource depletion and exhaustion, in particular the spreading freshwater crisis, deforestation and desertification; species migration; overpopulation and population migration; and the gamut of man-made security challenges including food insecurity, global inequality, the rise of failed states, religious fundamentalism and terrorism, nuclear proliferation and regional arms races, especially in south and east Asia.

You have to see climate change in the context of these other, inter-related factors, Klem. It's no coincidence that we're hitting walls in so many of these areas simultaneously.

When I was born the world population was well under 3-billion, even that triple what it had been just a century and a half earlier. In less that a single lifetime the population has more than doubled again and, at the same time, per capita consumption has soared.

You can't duck the numbers, Klem, they are what they are. The worst part is we're led by a class of politician (of all stripes) who chose to govern as though we're still in the 80s even as we sail into uncharted and increasingly turbulent waters.

"You have to see climate change in the context of these other, inter-related factors, Klem."

All of those interrelated factors in your list are evidence of climate change only, none of them are evidence that CO2 is the cause.

BTW, When I was a kid back in the 1960′s and 70′s the UN said that we’d have 20 billion people by the year 2000. And if we didn’t do something about it there would be famines, war and death. We came in around 6.5 billion and today we are at 7 billion. They are still saying that 7 billion is too many and if we don’t do something about it there will be famines, war and death. I’ve been hearing this same thing for 40 years now.

I think if we had 3 billion they would still say it was too high. More famine, wars and death. Overpopulation is the gift that just keeps on giving.

Ever notice that they always say the population is too high but they never say what a safe population number might be.

If 20 billion was too high and 7 billion is still too high, what is the right number?

Klem, could you give me a reference to that UN projection of 20-billion people by 2000? I have never heard that.

Actually, the figure of 3-billion has been cited as a suitable ceiling for human population. You can read more about that at the Global Footprint Network.

You're quite incorrect in dismissing the list of problems I gave as tied to climate change. Some are climate related. Others such as widespread air, soil and water pollution, aren't. The same can be said of desertification, the exhaustion of once arable farmland and its transformation into desert. Deforestation is also not climate related nor is the collapse of global fisheries. It's hard to grasp how terrorism, nuclear proliferation or the arms races underway in Asia can be configured within the context of climate change.

As for your experiences over the past forty years, you obviously see that interval as substantial whereas it's really not.