The Rats in Uncle Steve's Pantry 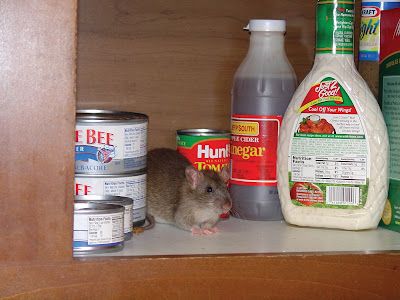 Stephen Harper knows he's got rats in the Conservative pantry and it must be giving him fits trying to figure out just who they are.

Somebody is leaking a steady stream of information, documents and e-mails to Bob Fife of CTV about Mike Duffy, Pam Wallin and Nigel Wright and who knows what or whom might be still to come.

Mike Duffy has taken refuge in his Cavendish cottage in P.E.I. and is quick to summon the police to clear off nosy journalists.   Harper is apparently in Peru although he's expected back to face down the Tory caucus on Tuesday morning.

This sounds like a settling of scores, a nascent civil war within the Tory senate caucus.  Perhaps it is the old guard, Progressive Conservatives, taking their revenge on the Harper upstarts, the new guard.   After all, when you look at the casualties so far - Brazeau, Duffy and Wallin, not to mention Nigel Wright - they were all handpicked by the prime minister.
Posted by The Mound of Sound at 12:41 PM

What Progressive Conservatives? The ones in the Senate appointed by Mulroney or Martin? Since first winning a minority, he basically kicked out Garth Turner and Bill Casey, and the last one standing was Jim Prentice who resigned after a short stint as Minister of the Environment.

If there are insiders trying to sabotage Harper, I have no idea who they might be but I don't imagine it's the rabid anti-choice, anti-gay marriage back benchers who were recently making noise about freedom of expression. Their collective IQ doesn't seem high enough but then again, I guess if the Tea Party could pull a Mitt Romney on the Republicans, anything is possible.

Harper leaves for Peru on Tuesday.

Rumour has it that he plans to shut the place down early and then prorogue come Fall.

I have to agree with BY, Mound. The only dissidents do appear to be that socon crowd, which as BY says, basically have a collective IQ of a house plant. No way they're smart enough to pull off this coup.

Michael Chong? Perhaps, but I don't think he has the chops to be that duplicitous.

No, no, people. This is coming from the PC contingent in the Senate, not the backbenches of the House. It's the Old Guard at work.

There is only one PC senator left in the senate these days...Elaine McCoy..who is now independent. The others have long since left.

Yes, just one who still sits as a PC. There is a core nonetheless who were appointed by Mulroney or Martin who represent the Old Guard and are understood to have little use for Harper.

It's not a big contingent. It doesn't have to be.

Lebreton, old Diefenbaker Tory. She was his junior secretary, under Bunny Pound