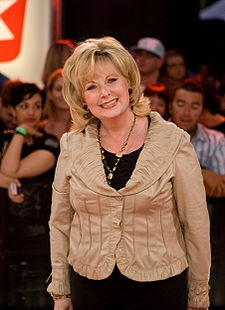 Earlier today, Harper-appointed senator Pam Wallin purported to "recuse" herself from the Conservative caucus pending the outcome of a forensic audit into her expenses.

Nice try, Pam.  According to CTV, Pam actually did the "PMO Perp Walk."   She didn't so much leave as she was shown the door after Harper's big guns got a gander at the preliminary audit report.

Nice of the "independent" auditors to give Harper the heads up, no?

Insiders told Fife that Wallin repaid $25,000 before the forensic audit began. She has since returned about $15,000 more to taxpayers, but sources say she will likely have to give more money back.
As the controversy over senate expenses grows, Fife reported there’s word Prime Minister Stephen Harper may prorogue Parliament in early June.

Yes, of course, Steve.   When the going gets ugly shut down Parliament and lay low until the heat dies.

Wallin, the darling of her hometown of Wadena, Saskatchewan, gave yoeman service to Harper for a good while before she earned her berth in the upper bunk.   She seemed to get a taste for the high life when Jean Chretien had her appointed Canada's consul-general in the Big Apple.  It has been reported she maintains residences in Ottawa, New York, Toronto and, of course, Wasilla, er Wadena.

By the way, if you're cruising through Wadena, be sure to have your picture taken at the Pam Wallin Drive street sign.   You'll have no problem finding it.  Just look for the town stop sign.  You can't miss it. 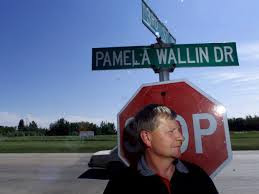 And if you simply cannot get enough of the Senate Mardi Gras fete, Coyne has a dandy wrap up today.
Posted by The Mound of Sound at 7:44 PM

A little over twenty years ago in Saskatchewan a bunch of Grant Devine's MLA's were caught falsifying communication expense records. A couple of them were even incarcerated. The magnitude of the scandal helped hasten the demise of Saskatchewan's Progressive Conservative Party. We should expect no less outrage here. In fact we should foment it at every opportunity.

More than a couple, Elliott. 13 were charged, most convicted, and a few did hard time.

I think you've touched on something, the lack of sustained moral outrage in these times. It's not that we forgive, it's more that we can't be bothered to remember.

That's why Harper is planning to prorogue Parliament in June when the audit reports come in. This is standard procedure for him in dealing with scandals. Shut the place down for the summer and the Canadian public will have forgotten all about it by Labour Day. It works, again and again and again.

Christy Clark went into this week's elections leading a party with a blistering 12-year record of corruption, scandal and outright dishonesty. Using another classic Harper trick, she seized the narrative and transformed the election from an accounting of her party's record into a referendum on the new guy who she royally smeared. Bingo. From disgrace to major victory.

And we wonder why corporatist oligarchy is steadily choking out the vestiges of our democratic past.

This problem of stealing...that is what it is....claiming expenses has to be fully investigated but isn't it wonderful how the Harper Gov. goes after women in his "mist" of what is ethical.

Anyong, reality check. There are four senators who are currently under scrutiny. Just one of the four is female. And you should realize that the Harper government isn't going after anyone. This is not of their doing. They wish it had never surfaced at all.

MOS..think about the past two or three years. How many women have resigned? Of course the Gov. is going after..just by trying to cover.

The whole utopia is there only for you and your desires.