Maybe There's More Sarah Palin Than We'd Like to Admit in Our Own Politicians. 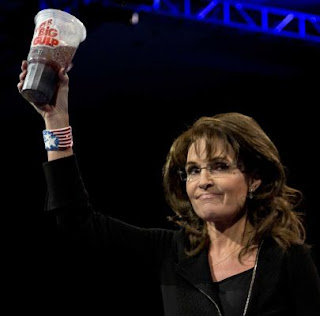 An eye-opener in today's Guardian reveals that, before she jettisoned the Alaska governor's office to join John McCain's presidential campaign, Sarah Palin was actively involved on the climate change front.

In September 2007, a rising star of Alaskan politics dared to take on one of the toughest, most challenging issues for any leader: climate change. That summer, seasonal ice cover had fallen to its lowest extent since satellite records began in 1979, leaving much of the Arctic as open water. A few months earlier, Al Gore had won an Oscar for An Inconvenient Truth.

It seemed as if the timing was right to deal with climate change, and so the politician approached a group of high-level officials to develop a climate change strategy for Alaska.

Their leader was Sarah Palin, the then governor of Alaska before her entry into national Republican party politics. "Climate change is not just an environmental issue. It is also a social, cultural, and economic issue important to all Alaskans," said Palin, announcing two new working groups on climate change.

"As a result of this warming, coastal erosion, thawing permafrost, retreating sea ice, record forest fires, and other changes are affecting, and will continue to affect, the lifestyles and livelihoods of Alaskans," she went on.

The focus on climate was temporary. Once Palin joined the Republican ticket as running mate to John McCain in the 2008 presidential elections, Palin dismissed climate science as "snake oil".

Sarah Palin was obviously a moral contortionist whose flexibility allowed her to shake the bonds of integrity at will.  It's an enormously valuable skill for opportunists questing for power and don't we have a few of those in our own country?  It seems there's a bit of the Sarah Palin syndrome in our own pols.  Harper is full to the brim with it but it's not hard to detect traces of it in Mulcair and Trudeau also.

In today's political world where policy platforms are treated like military secrets to be concealed from an untrustworthy electorate this sort of moral flexibility is not only helpful but almost essential.  It is the undercarriage of political opportunism, the means of steering in this direction or that in pursuit of  extra votes here or there or over there.

When a contest becomes a race among opportunists, what choice does the public really have, what hope?  We're watching a spectacle of political musical chairs today only there's only one chair and it's smack dab in the centre and they all want their arse on  it.   These are the perfect conditions for moral ambiguity and opportunism.  There can only be one winner but everyone else, the public included, stands to lose.

Political opportunism is not political leadership and rarely will any lasting good come of it.
Posted by The Mound of Sound at 9:54 AM