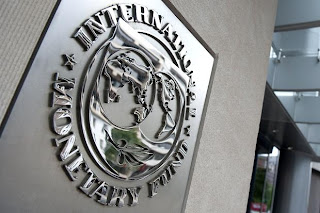 Britain's Conservative Cameron government are the High Priests of bone-crushing austerity.   David Cameron and his gaggle of privileged Saville Row suiters are not interested in sparing the lash when it comes to Britain's weak and vulnerable.   Meanwhile, Steve Harper looks on with fawning admiration at everything he wishes he could be.

Yet Cameron has now run afoul of that bastion of radical socialism, the International Monetary Fund.  The IMF is crying "enough already" and pleading with Cameron to reverse course if only to boost the British economy.

It said the £10bn-worth of spending cuts and taxes planned for the coming year would be a "drag on growth" and urged the government to do more to stimulate the economy.

"In a range of policy areas, the government should be more supportive of growth. What is important now is not to make a mistake today and presume that all will be well with the economy some years from now. I think it's important to get started on infrastructure projects that will support the economy." He said that would allow the government to push back some of the cuts and bring forward more supportive measures.

The UK could suffer higher unemployment and lose economic capacity permanently if it ignores the fund's advice, he warned.
Posted by The Mound of Sound at 8:04 AM

Cameron is no different than the evil Harper.

Harper has a very shady political past. He had even tried to have, Alberta separate from Canada.

Harper was Policy Chief for his, Northern Foundation Party of 1989. When Harper's Caucus called Harper a control freak, they were exactly right. All Dictators are control freaks. Harper had hired Wolfgang Droege and his Heritage Front, as security for Preston Manning. Wolfgang Droege was murdered in 2005.

Cameron is no different than the evil Harper.

Harper has a very shady political past. He had even tried to have, Alberta separate from Canada.

Harper was Policy Chief for his, Northern Foundation Party of 1989. When Harper's Caucus called Harper a control freak, they were exactly right. All Dictators are control freaks. Harper had hired Wolfgang Droege and his Heritage Front, as security for Preston Manning. Wolfgang Droege was murdered in 2005.

Just want to fix one link.

Unfortunately, Emily Dee seems to have abandoned this great blog. Hope everything is well with her.

Cameron is very different from Harper.

He's right wing, but Harper is just a do-nothing, know-nothing tool, and always has been and will be. Harper's background is in the National Citizens coalition and before that, data-entry clerk for an oil company. Cameron's actually had a real job. Harper flunked out of his first master's graduate program. Cameron excelled.

Cameron's been bad advocating austerity. But at least he was smart enough to not bind Britain to the EU's stability and growth pact, which would preclude his or any future government from ever reversing course from austerity. This pact bars running large budget deficits, even if economically warranted. (What I find astounding is that it was the left that was criticizing Cameron for this.)

Anyway, there is an out for Cameron: P3s: Keynesian spending for uptight right-wingers. And his government has made noise supporting them. P3s are worse than just spending money, since they are inefficient, and are subject to a lack of transparency and potential cronyism. But they are better than nothing. And some inefficiency right now in government spending wouldn't necessarily be bad (but when the economy improves, it would become a problem).

P3's allow the government to promise to pay the private sector partner a yearly fee for the infrastructure or service they provide. And the guarantee of government revenue means the private partner shouldn't have trouble borrowing from the banks, which could serve to buttress their private business, and help Banks. (Banks are unwilling to lend, because business can't get revenue, because the people are scared and are retrenching their finances rather than spending. So someone needs to spend: that someone has to be government.)

P3s also mean that the debt appears on the private company's ledgers, rather than the government's. So for governments which are (stupidly) obsessed over debt, this allows them, for appearances' sake, to spend a little each year, rather than borrow a lot up front and greatly increase their debt.

Crf, Cameron is just a well-spoken, elitist, right wing shit for brains. His gov't is systematically destroying public services, selling off firetrucks for 2 pounds, giving contracts to Virgin to run children's healthcare units and GS4 to run rape crisis centres in the Midlands.

All these so-called leaders have to do is look to Iceland for solutions or even a little backbone. Ever since I was a teenager in this country it seems, all we have lived with is recession after recession and austrity. Austrity doesn't fix anything. It just makes the rich richer and they don't give a darn about anything except their bank account. Let's ship the 1% off to Mars. Let them develop a system there where they can continue with their FUN among themselves.

That's actually an interesting idea, Anon - at least to the extent of ostracizing the 1% from the rest of society. It would, of course, be the end of them just as surely as if you had delivered them to the surface of Mars.

They're inherently parasitic in nature and like all parasites they're completely dependent on having a host to feed from. In our case the host is the 99% or at least the lowest 75-85%. It is their economic and political power that the 1% has been so successful in siphoning away and that has been almost entirely the doing of a collaborative and corrupt political class.

As Stiglitz shows in The Price of Inequality, very little inequality - whether of income, wealth or opportunity - is merit or market-driven. The overwhelming bulk of it is legislated. This is a process today known as "political capture." It's a vehicle by which non-voter entities insinuate themselves between the electorate and those they install in office.