And the Walls Come Tumbling Down 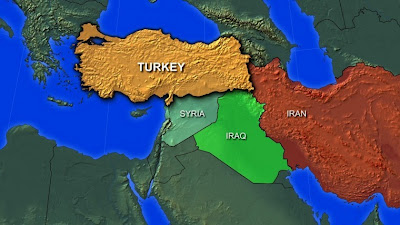 Another look at the century old and ongoing, lethal aftermath of the way Britain and France carved up the Middle East following the collapse of the Ottoman Empire post WWI.  It's a topic addressed here in several posts, the most recent just yesterday.

We're now witnessing the walls, built by the Brits and the French in carving up the region to suit their convenience, beginning to crumble.   Will the west now step in to shore up their malignant handiwork even as it collapses under the weight of irreconcilable ethnic and religious tensions?  From The Independent:

...for the first time in over 90 years, the whole postwar settlement in the region is coming unstuck. External frontiers are no longer the impassable barriers they were until recently, while internal dividing lines are becoming as complicated to cross as international frontiers.
In Syria, the government no longer controls many crossing points into Turkey and Iraq. Syrian rebels advance and retreat without hindrance across their country's international borders, while Shia and Sunni fighters from Lebanon increasingly fight on opposing sides in Syria. The Israelis bomb Syria at will. Of course, the movements of guerrilla bands in the midst of a civil war do not necessarily mean that the state is finally disintegrating. But the permeability of its borders suggests that whoever comes out as the winner of the Syrian civil war will rule a weak state scarcely capable of defending itself.

The same process is at work in Iraq. The so-called trigger line dividing Kurdish-controlled territory in the north from the rest of Iraq is more and more like a frontier defended on both sides by armed force. Baghdad infuriated the Kurds last year by setting up the Dijla (Tigris) Operations Command, which threatened to enforce central military control over areas disputed between Kurds and Arabs.

Dividing lines got more complicated in Iraq after the Hawaijah massacre on 23 April left at least 44 Sunni Arab protesters dead. This came after four months of massive but peaceful Sunni protests against discrimination and persecution. The result of this ever-deeper rift between the Sunni and the Shia-dominated government in Baghdad is that Iraqi troops in Sunni-majority areas behave like an occupation army. At night, they abandon isolated outposts so they can concentrate forces in defensible positions. Iraqi government control in the northern half of the country is becoming ever more tenuous.

The history of the outright, self-serving duplicity of France, Britain and, to a lesser extent, Czarist Russia is fascinating and reveals plainly how they planted the seeds of the ongoing and endless conflict that wracks the Muslim world to this day and will continue into the future.

Not surprisingly, the leaders of the 30 million Kurds are the most jubilant at the discrediting of agreements of which they, along with the Palestinians, were to be the greatest victims. After being divided between Iraq, Turkey, Iran and Syria, they sense their moment has finally come. In Iraq, they enjoy autonomy close to independence, and in Syria they have seized control of their own towns and villages. In Turkey, as the PKK Turkish Kurd guerrillas begin to trek back to the Qandil mountains in northern Iraq under a peace deal, the Kurds have shown that, in 30 years of war, the Turkish state has failed to crush them.

But as the 20th century settlement of the Middle East collapses, the outcome is unlikely to be peace and prosperity. It is easy to see what is wrong with the governments in present-day Iraq and Syria, but not what would replace them. Look at the almost unanimous applause among foreign politicians and media at the fall of Colonel Gaddafi in 2011, then look at Libya now, its government permanently besieged or on the run from militia gunmen.

It's no wonder that London, Paris and Washington wrestle with how to deal with Syria?  What are their choices but to bow out entirely or attempt to reinstate a 21st century equivalent of their early 20th century fiasco?
Posted by The Mound of Sound at 9:09 AM

Tha patchework of Nations bundled into patchwork States is just as evident in Europe as in the Middle East. Look at Russia, it is just as confused when it comes to nationalities and boundaries. Switzerland, came to grips with their three (plus) seperate nations in one state centuries ago. You could argue the fault in the former Ottoman empire lies with the victors who partitioned it, but honestly, the Ottoman empire was just as confused as the Austro_Hungarian national patchwork in south eastern Europe. The long and short of it is that after at least two thousand years of migration, conquest, and settlement, between Asia Minor, the Balkans, and Eastern Europe there is little in the way of coherent natural boundaries between ethnic peoples. If you actually believe that the only way to organise a State is along ethnic lines, then there will never be any coherent nation states without a series of ethnic wars and cleansing exercises. It just is not reasonable to blame France and England for failing to create neat little ethnic enclaves.

I disagree, BGB, although full points for a spirited defence. Whenever you have straight line borders predominant it's evidence of settlement by conquest and colonization.

This is not to say there was peace in the Muslim world before the post WWI machinations of the Brits and French. Not at all. But those were affairs ordinarily settled by the parties themselves out of their own interests, not to suit the commercial interests of some distant foreign power.

I think you would find a great deal of difficulty persuading a Kurd of the incoherence of a free Kurdish state, Kurdistan. The same would apply for the Pashtun and the Baloch of Afghanistan/Pakistan.

I disagree about French and British culpability. They plainly had an obligation to accommodate ethnic realities in dividing up the region that they ignored to suit their convenience. And you can explore their outright betrayal of the Kurds elsewhere on this blog.

Death of the Liberal Class by Chris Hedges explaines why events have taken place stated in your blog. As a critique of the so-called "liberal class", its main argument is that a breach has now occurred between the liberal class and the radical social and political movements it once supported or sympathized with. By serving history and power, the "liberal class" surrendered their power and moral authority to the state. It's an authority they cannot get back, because when the State holds these powers, it will not give them up without a mass movement making such demands. This restates an overarching theme of Death of the Liberal Class. According to Hedges, capitulation by the "liberal class" has allowed the takeover of "statecraft" by corporations who, now unchecked by an independent intellectual class and the popular movements that gave them viability, wield enormous influence in the legal, legislative, and financial centers of power. This corporate coup d'etat was accomplished in the United States, says Hedges, because corporations have no loyalty to a nation-state, especially those corporations that are multinational or transnational. So voila we have the situation you describe in your blog asnd that includes governments who serve corporations and Globalization, and all beginning in progressive strength afer the first world war.

I'd like to add. All one has to do in Canada is read "Don't Tell The Newfoundlanders" to understand just how barbarous, brutal and sadistic governments can be toward another smaller nations they perceive to be stupid where an attempt to pull the wool over the citizens eyes took place and right here in our own country. A quote...“I grew up, like many Newfoundlanders, sensing that something had been very wrong about the whole process of Confederation but not knowing exactly what. So I’m very grateful to Greg Malone for doing the research that finally lays the whole sordid story bare. It may or may not change the way Newfoundlanders behave towards Canada, but it will certainly change the way we think about the relationship.”
—Gwynne Dyer ...my sentiments exactly. Newfoundlanders have never really trusted any Canadian government. Who knows perhaps the affair about Newfoundland encouraged Mr. Dyer to become a Middle East expert.

The sins of the fathers are not being visited upon the sons, but upon the grandsons and granddaughters and their sons and daughters.