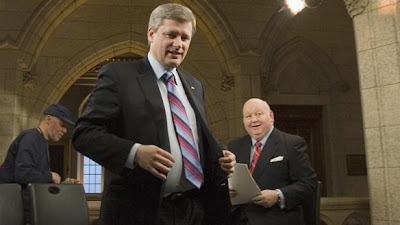 It has always been my suspicion that Stephen Harper wanted to govern at least until he pushed through the Northern Gateway to get Athabasca bitumen flowing to Asia.

With no small degree of help from the New Democrats and Liberals, Harper has already achieved his overarching goal of moving Canada's political centre permanently to the right but it's the Northern Gateway he sees as his legacy.

To see that through Harper needs to cut some quick deal with Christy Clark, give the environmental review process a laxative, and move to steamroller the pipeline opposition, no matter the cost.  People in a rush expedite.   Foot hard on the pedal and a firm grip on the wheel.

Now there are troubling signs of bad road ahead.   That might well explain the bizarre goings on in Ottawa lately.   Steve Harper can't be distracted by troubles within his own caucus.   He needs them to go away, fast and at almost any cost.

Brazeau he could have handled.  Ditch the guy.  He wasn't an asset anyway.   Wallin?  Hard to say but, in any case, safe as in "non-threatening."   Duffy?  Different story entirely.

Some say Duffy was the hardest-working Tory senator, at least in his exertions on behalf of the Conservative Party.  He was in permanent campaign mode, criss-crossing Canada to star at fundraisers and campaign rallies.  He was a senator from Prince Edward Island in name only, doing what cottagers do, spending the summer recesses at his cottage there.  It was a residency bubble that was easily burst.

When the fit hit the shan, Sideshow Steve responded true to form trying to distance himself, using his closest aides to make it go away, ever ready and willing to throw human sacrifices under the political bus.

Duffy, accepting his fate, went off to The Royal Bank to negotiate a loan to repay his housing expenses.   For reasons that may only be known to Harper and his former chief of staff, Nigel Wright, a decision was taken to keep Duffy's financial situation "in house."  With that, Wright wrote Duffy a personal cheque to cover all the "expenses."   Apparently the cheque came with a direction for Duffy to dummy up and under no circumstances cooperate with the senate-appointed auditors.   None of this was ever to surface in public or even in private and nobody, Duffy or Wright, was to report any of the details to anyone no matter what was required.  The Mafia has a word for it, "omerta."

But somebody talked and began feeding Duffy's e-mails to CTV where Old Duff had burned his bridges on taking his senate appointment.  Another mystery.   Who so had it in for Duffy who was also privy to the senator's e-mails might have ratted him out to Bob Fife?


Some are pointing fingers at "old guard" Tories unhappy that Duffy, a lifelong Liberal turned Latter Day Tory, eclipsed them and stole so much credit for Harper's majority win in the last election.  Old Duff certainly hasn't been reluctant to throw his considerable weight around.  He might have made enemies inside as easily as he accumulated them outside.

This might have been where Harper stepped in to help out the guy who had worked so tirelessly for his success and rescue him from the backstabbers in his own upper chamber.  "Nigel, get Duffy a cheque.  Make it a gift.  Yeah, for the whole amount.   Make this all go away. And make sure no one's the wiser."

And it just might have worked if Duffy's rivals hadn't got their hands on his e-mail.   Suddenly the e-mail forced admissions that put Wright in the crosshairs which threatened the guy crouching immediately behind Wright, Stephen Joseph Harper.   Fortunately, for Harper, Wright was willing to take the bullet, allowing Steve to retreat to his office to "behave strangely."

People like Nigel Wright know the importance of words and precision.  It's often more important what isn't said than what is.  Here is how he put the Duffy payment.   “I did not advise the Prime Minister of the means by which Sen. Duffy’s expenses were repaid, either before or after the fact.”

What he's saying is that he didn't tell Harper "the means" by which Duffy's expenses were covered but that doesn't mean that Harper didn't know, well in advance, that Duffy was to be paid somehow.  And it doesn't say that Wright did this of his own volition instead of at the direction of Stephen Harper.   All it says is that Wright didn't tell Steve he was writing a personal cheque to cover the funds.

So, where does this leave Duffy?   Some say he's got the goods on the Tory Senate establishment that stabbed him in the back.   So, while he may be out of the Tory Caucus, he's not inclined to go anywhere and they can't force him out either without falling on their own swords.

As for Harper, he seems to have lost control of the narrative, not to mention his unruly senate caucus.  It's rumoured Steve will prorogue Parliament in the coming weeks, perhaps to get a summer recess to let scandal die and to herd his senate cats back into their pen.

Some speculate Steve might go for the same play that took out Ignatieff - a long summer recess followed by a snap election.  Could be but he'd be risking the secure majority term he has remaining to push through Northern Gateway.  If he wound up with a minority, that pipeline could be in real jeopardy.

My guess is that Steve is going to play this one by ear.  He'll shut down Parliament as soon as the auditors' reports are made public and then figure out how to keep from becoming personally implicated in the Duffy/Wright scandal while taming his unruly senate caucus.  It's hard to see how he'll come back after Labour Day with the same, cohesive happy warriors who brought him his majority government.  And no one knows better than Steve the difference between calculated risk and reckless gamble.

Harper is vulnerable and he knows it.   He's not in control of the narrative this time and, for him, control is everything.

If you want more, read the transcript of the CBC's interview with retired  House of Commons law clerk Rob Walsh.   Here's how the Parliamentary veteran summed it up:

In my years on the Hill, there have been a number of huge controversies over the years, as you know. No two of them seem alike. This, to me, is unbelievable, frankly. It just simply is unbelievable.

Yes the question is how is Duffy different to the other three? If Harper has to he will take out others to cover what ever is going on with the one.

How is Duffy different? Part of it is his stubborness and determination to hang on to his job. Part of it is that he knows how to inflict damage and may be quite willing to take a lot of others down with him.

He wasn't given 90-grand free and clear because he's jovial.

I think Harper is now trying desperately to think of ways to regain control of the unruly mob. He'll be worth keeping a close eye on over the next week or two. We all know the fate that awaits the schoolyard bully when the rest of the kids refuse to be afraid of him any longer.

This is truly fascinating.

One had always thought that CON-Party discipline was iron-clad.

There's an old saying in exporting: always pack for the weakest leg of the journey.

In this case, you're saying that some 'unbeknownst-to-Harper' weak link in the chain gave way, somewhere or at sometime in the last 7 days. And that this has loosened the flood gates.

When I as a political neophyte (I gave to a party, I put up a lawn sign, I volunteer) hear about this absolute collapse of party discipline......... especially with THIS party which eviscerates its young should they have a single thought of their own.......... I'm still astonished that you dug up this info.

Can you cite some sources?

No, I can absolutely mention no names. They may be Tories but they have been fast friends for, my god, THIRTY YEARS? Ahhhh!!! Damn, I hate feeling old.

" They may be Tories"

If they are part of the Harper Fundamentalist Reformatories, they ARE NOT TORIES and to call them such is an insult to every actual Tory all the way back to Merrie Olde England and its Parliament!