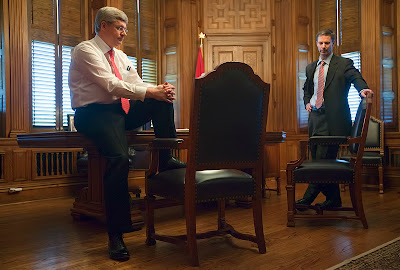 Nigel Wright continues to be Stephen Harper's moat and drawbridge in the Duffy affair.

Steve says he knew nothing about the $90,000 gift via a personal cheque from Wright to the Cavendish Cottager and Wright backs him up.   Even though Wright has resigned and his story about Harper being in the dark is, well, more than implausible, Wright's word still carries some weight.

Maybe not so much after all.   Wright has some major credibility problems with the dodgy story he's spun so far.   In particular, Wright's story of how he came to write the cheque is full of holes.  According to Harper's former Chief of Staff, it was an impulse gesture, a "spur of the moment" thing.   No, sorry Nigel, it was anything but spur of the moment.

There was actually a fairly elaborate process, involving lawyers on both sides negotiating terms and conditions, that pretty much shatters Nigel's "spur of the moment" claim and, with it, the remainder of his integrity and Harper's.

Nigel didn't just slip Duffy a cheque.   He had Stephen Harper's former special counsel and legal advisor, Benjamin Perrin, draft the "letter of understanding" that set out the terms of the deal between Wright and Duffy.

Perrin, currently an associate professor at UBC's law faculty, isn't answering speaking to reporters.   Quelle surprise!  Imagine the questions he might be asked.   For example, he might be asked what he thought of the deal in reference to Section 17(1) of the Senate Conflict of Interest Code, or Section 16(1) of the Parliament of Canada Act, or Section 121(1) of the Criminal Code of Canada?

And, given that he's not a mere lawyer but a law professor and the prime minister's former special counsel and legal advisor, just what in hell was he doing facilitating a deal that seems to run afoul of all three enactments even to the point of possibly being criminal?

Benny, what were you thinking?  By the way, exactly who was your client(s)?  Did you tell your client that this was a dodgy deal that could land him/them in big trouble if word leaked out?  And don't you know that lawyers aren't supposed to be doing this sort of thing and can even be made to answer for it?

Or was it a "spur of the moment" thing, Benny?

And so the web grows ever wider, ensnaring ever more characters.  Now we've got Stephen Harper's Chief of Staff and Stephen Harper's Special Counsel in on the Duffy cash scandal.  Who's next?  Who knows?  But don't worry, the prime minister knew absolutely nothing about any of this.
Posted by The Mound of Sound at 9:27 PM

Welcome to the reality of The Harper Brand of transparency, accountability and good government.. creating jobs and growing the economy. The Brand has been very good to energy consortiums, salmon farms, lawyer's, live/robo callers, ad agencies, and PR firms' economies so far.. the rest of us not so much.

The Harper Government recognizes the value of Attorney - Client privilege to close off uncomfortable, damaging questions without having to answer or explain to anyone. Notice how all concerned in the orbit of Duffy/Wallin et al have lawyers in play or lurching into visibility ...

No doubt about it, 'parliamentary privilege' will soon be invoked as well .. wherever applicable .. and even if not. Lawyers will explain this to Canada.. so not to worry.

Of course there are matters of 'National Security' involved.. so there's another layer of obfuscation ready to be sprayed at taxpayers by Van Loan, Michelle Rempel, Fred DeLorey, Poilievre and Arthur Hamilton in Ottawa.. Of course the layers of lawyers must be involved !

Finally, re all of the above, the Harper Government litigates against Canada and Canadians without compunction and has proven they are fearless at defying decisions and orders of the courts at federal and provincial levels. More lawyers !

Finally - Finally .. The Harper Brand can fall back on the bottomless expenditures of TV, Internet ads and partisan media to wrap smoke screens and red herrings around any story that causes alarm in their entitled fantasy land. Where lawyers fear to tread .. there's always captured media, public relations firms and partisan pollsters to generate 'spin' .. and turn damage control into votes.

Check the follow-up piece I just posted, Sal. Harper is finished. Even if he might have denied Wright, Harper won't be able to deny Wright plus Perrin.

Perrin was the prime minister's personal legal advisor, Steve Harper's personal lawyer. The lawyer-client relationship absolutely precluded him from writing the letter of understanding without his principal client's full knowledge and approval.

It was damaging having his chief of staff involved. It's utterly damning that his personal legal counsel was also in on it. Harper cannot get out from under Perrin.

Is it time that someone reminded us of the Cadman affair? In that case Harper, Finlay and Flanagan were caught doing something just as illegal as bribing Duffy, and managed to bury it through threats of legal action and media bluster. Will they be allowed to do that again? Judging from recent Sun News coverage it may well work.

As damning as all this (should be) the harper brand will unfortunately survive as all harper has to say is that he's focused on growing the economy and creating jobs. Voila, scandal's gone, and he will cruise on into victory in 2015. I'm now convinced more than ever that if lipstick can stick to a pig so utterly phoney as one Christy Joan Clark, it will stick to harper, and Crack Mayor Stupid Ford for that matter. The right wing is in control and is here to stay in Canada for at least a generation.