Think we don't have a global population problem?  Think we're not exhausting our environment?  Well has the U.N. got a grub for you.

A new report from the U.N. Food & Agriculture Organization says if the world wants to achieve food security, a lot of people are going to have to start eating bugs.   The report, Edible Insects - Future Prospects for Food and Feed Security, shows  an assortment of supposedly delectable little critters. 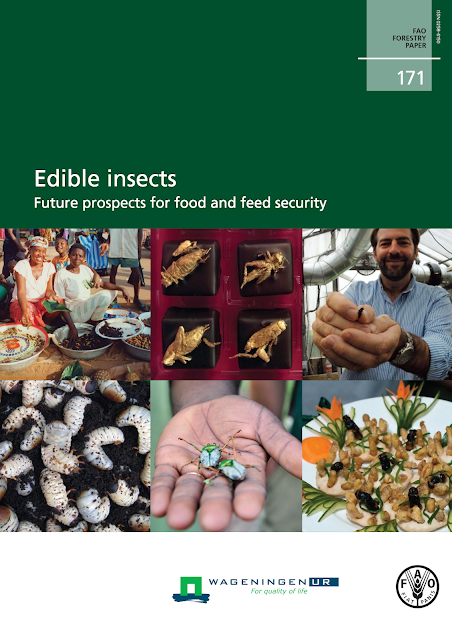 The report claims that bugs already form an integral part of the diets of 2-billion people.  It holds, logically enough, that insects may provide the best alternative source of protein and feed for a food-stressed world.

There are chapters on such things as:  everything you ever wanted to know about mealworms; insects as a feed source for poultry and fish; insect farming, preservation and storage; and, of course, the disgust factor (my personal favourite).  Who among us knows as much as they would like about the brown planthopper or Maguey worms or Ahuahutle aka "Mexican caviar"?

So if you're inclined to make a real bugger of yourself, follow the link above.
Posted by The Mound of Sound at 3:04 PM

Yum, Any word Mound, on bloodworms, which Wikipedia describes as having "a creamy pink color, as their pale skin allows their red body fluids that contain hemoglobin to show through"?

Gottta go. My wife tells me that supper is ready. Chef's surprise tonight!

Grind 'em up into a paste and add lots of seasoning. Bug burgers.

Gentlemen, be my guest. Now if you can come up with a tasty recipe for bed bugs you could be in business.

As for me I'd sooner shoot a cougar first. I'm told they're delicious.

While living and working in China, I was challenged to go to an insect restaurant for brunch. I did and was able to put a variety of insects on my plate. However, when it came to eating them, I had to look a rather large window at the end of the dining room. I was surprised that stag beetles taste like bacon. And imagine there aren't any pesticides nor hormone growth injections to consume.