Check this out.  It's a twitter-based map of racism in the United States. 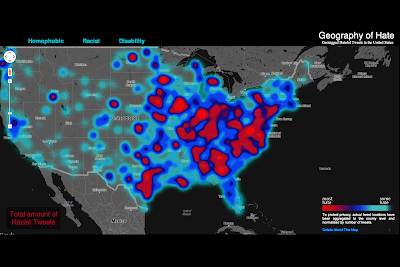 A team of geographers from Humboldt State University has developed a map of the United States which plots the intensity of discriminatory speech in social media, including racism, homophobia and ableism.

The team -- headed up by Dr Monica Stephens -- used a database of geotagged tweets called DOLLY to scan the Twitter output in North America between June 2012 and April 2013. They were scanning for a list of words along with the sentiment attached to those words -- this was done manually, with undergraduate students Amelia Egle, Matthew Eiben and Miles Ross reading the tweets to deduce whether a word was being used in a positive, negative or neutral way.

I'm not sure about this.  Obviously the results are higher in regions with higher population density and appear lower or even non-existent in sparsely populated states.  It's an interesting example, however, of how social media can be used to profile regions and populations.  Big Bro is Watchin' You All.