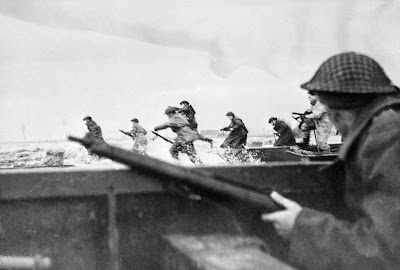 Harry Leslie Smith says he's too old to fight those who today would wreck the civilization he and so many others fought and in too many cases died to protect.  In his closing years Harry sees his civilization again imperiled only, this time, not from some distant fascist monster but from within.

Across the world death moved, for too many years in lock step with both the season for sowing and for reaping. We were a world at war, and for those of us in Britain the cost was enormous in lost and ruined lives. But it didn't matter because we believed that the cause was just and that, whether we came from humble or refined stock, we were all in this war together. It was that common and shared faith in ourselves and in the notion that everyone's contribution, large or small, was important to the war effort that saw us through those dark hours. It was what kept us buggering on  until our fortunes turned and the war against Nazi Germany reached its bloody end in the spring of 1945.

...I was sure of one thing: I was a lucky man. I had what was called back then a good war and I was not disappointed by my survival. I had done my bit and I never shirked my paymaster's orders, but I was one of the fortunate few; death had eluded me while I served in the RAF.

I felt blessed by luck because so many others – friends, neighbours, acquaintances and complete strangers – had not been so lucky. They were never going to see twenty-five or be able to put down roots and raise a family and enjoy the fruits of peace. I knew like the rest of my compatriots knew, the dead had reluctantly sacrificed their existence to preserve civilisation for the living.

...It has been almost 70 years since the guns of the second world war fell silent and I am no longer sure if the dead would agree that their lives were worth the price of today's society.

To me, this brave new world feels all wrong, out of tune with what the men and women of World War Two accomplished with our "blood, sweat and tears". It just seems too flippant, too easy, too profane in this present world; for our politicians, our media pundits, and our industrial military complex to intone the beaches of D-Day, Sword, Juno, Gold and Omaha as if it were the catechism for freedom, when our individual and collective liberty is more at risk now than it has ever been since the end of Nazism.

My own father, one of Harry's happy warriors, came to speak similar thoughts as his life drew to a close.   Thoughts that had never truly taken hold of his consciousness until he embarked on the years of reflection that sometimes come to us, if we're lucky, as we near the end of life.  It's a powerful mix of a sense of betrayal and failure.  It's a frank and candidate opening of the books and a hard look at the debit side of the ledger that reveals how little of the credit column actually remains.

Today, however, in a world where our reservoirs of wealth are as deep and enormous as all the mighty rivers of the world combined, our politicians, financial institutions and megalithic industries tell us we can no longer afford these human rights that men sacrificed their lives for: the freedom to live with dignity in a compassionate society. We are told by those in charge that we can no longer live with luxuries like healthcare, proper state funded pensions, decent wages, trade unions and most aspects of our social safety network.

The problem with society, today, is not lack of money or debt but lack of ideas, lack of commitment by our government to realise that its constituents are the people, not city bankers and hedge fund managers whose loyalty is to their ledger books rather than to the community. I don't know if we will come out of this present darkness. Perhaps humanity will simply retreat into the caves whence our ancestors came because we were cowed by self-serving political parties and dubious leaders of business. I hope not, for the sake of the generations to come, but there is one thing I am certain of: had the politicians and business mandarins of today been in power in 1939, they wouldn't have had the bottle to fight Nazism. There would have been no Dunkirk, no Battle of Britain, no Finest Hour. Our leaders today on either side of the house would have allowed the lights across Europe to grow dim, because after all that would have been the cheapest and most prudent solution to Hitler's tyranny.

We owe a lot to Harry and all the others of his kind but there's only one way to make good our debt.   That is to keep this message alive and act on it in very tangible ways, even if that means accepting some risk and uncertainty, for they showed us that you have to be willing to accept great risks and sacrifice if you're to have any chance of prevailing.