A Man of No Integrity and Limitless Hypocrisy 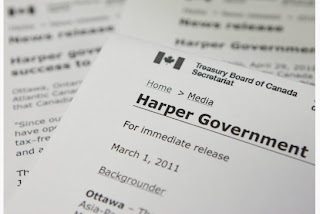 Stephen Harper's performance before the Conservative parliamentary caucus this morning spoke volumes for the integrity and sense of raw power and privilege of what passes for a prime minister in Canada today.

Harper played victim and complained about how he was very upset at the conduct of certain Parliamentarians (i.e. Duffy, Wallin and Brazeau) and how he'd been let down by his own Prime Minister's Office.

Having, like Pilate, washed his hands of the affair, Harper demanded  the Senate reform itself forthwith, clean up its act, put an end to these transgressions.

In fact, almost all of the real corruption in this scandal emanated from Harper and his closest aides (or just his aides if you believe in the Easter Bunny and the claims that Harper had no knowledge of any of this).   That's where the corruption is, within Stephen Harper and his hand-picked team.   So it's a little rich when the Great Corrupter points fingers at the Senate and demands they reform.

This greasy bait and switch is an integral party of Harper's determination to regain control of this scandal.  He's determined to roll this scandal back from the PMO and into Duffy's lap because he knows if he doesn't turn this around, the scandal is heading straight for him.

Curious there was not the slightest mention today of reforming the Prime Minister's Office.  That says it all for what is truly at play here.
Posted by The Mound of Sound at 7:06 PM

Very good points. I have been feeling the same way. Blaming the Institution of the Senate for the actions of a few of its members is the same as saying some Bank managers have embezzled funds so lets abolish Banks. The problem is obviously in the PMO's office, the problem is with Stephen Harper. He is clearly incompetent. Good grief ! If he doesn't even know what the heck is going on in his own office then how can he be trusted with the fiduciary responsibilities of a whole country. Who was in charge in the P.M.O.? Nigel Wright appeared to have been calling the shots.

The whitewash has already begun, Mound.

Shakespeare had it wrong I think.

Lawyers are more useful than journalists.

Incredible to believe that these idiots we have today would have turned Watergate into a story about poor hotel security.

Like the way our fearless leader makes the statement of being concerned about our senate, and they promptly gets on a plane and leaves the country, AGAIN

Anon, Harper's problem isn't incompetence, it's that he is morally bankrupt and politically corrupt. His sins are of commission, not omission. There is a huge difference there but there is no mistaking it.

Yes, Dana, you're right. As I rehashed these events in my head, I kept wondering why some member of Harper's Senate caucus didn't stand up at the meeting and walk our in resignation. Are they too that bereft of integrity for the duty they owe the country? Will they forever lick this reprobate's boots?

BTW, having been a journalist and a lawyer, I resent your tawdry smear. I did, however, enjoy your Watergate notion. Right on the mark. I thank you for that.

Ah, I am a grand master of the tawdry smear.

Had I but known your history I would have included the 'present company excluded' proviso.

Are there any other tawdry smears I should avoid? :-/

I wondered if Vern White might stand by what he said a few days ago, but alas, twas not to be. Nice words but some Con muscle got to him and showed him the value of loyalty was a lot higher than the price of his integrity. His silence was deafening.

I despised his words "these distractions" His belittling of what will be a major case of fraud embroiling this conservative govt and the PM, its shocking! This harper regime has many scandals and they just keep getting worse(connsidering there is a list of 20 or so for the last five years, thats very telling)
and so once again Harper is telling people what is right and wrong... but he finger pts away from himself, its incredible that his moral compass is so out of whack:P He is one of the most arrogant leaders of the century. I wonder when 2015 comes around if he is going to announce that the canadian people dont care for elections...as they are a distraction:P
his MO: Deny, Deflect and Dash off

.. great comments .. and an excellent series of reports & insights re the shocking performances of The Harper Troup d'Albertawa .. a subsidized farce currently playing to sold out MP's, financial insiders and a fascinated Chinese politburo ..

We do move at the speed of fossilization to react to parliamentary incompetence, deceit and fraud.. so one wonders whether Stevie/Ray will bother to continue obstructing, redacting, deleting, litigating.

More likely they'll refine & continue the useful tactic of continuously battering at the boreal, democracy, elections, perceptions, environment.. Make enough noise in the Senate and nobody will notice those LNG refineries, frackers, flooded valleys, pipelines & supertanker plague ships.. or that there are no fish, mammals, crustaceans, shellfish or birds offshore.. or in our formerly freshwater & forest ecosystems.

We live.. and may die.. as malevolently dangerous egosystems such as The Harper Brand & its gawpy following, spew & inject toxic egonomics, deluded votes & dogma into the very tissue of this country called Canada ... its peoples, including our First Nations .. and our environment and ecosystems.

Yes, Sal, we are saddled with a thoroughly, end to end, corrupt and abusive federal government. It is institutionalized corruption from Bruce Carson to Nigel Wright to Stephen Harper himself. Our prime minister acts as though basic decency is weakness, of no currency. He is an abomination.

What is also really sickening about this government is that it normally takes multiple majority governments before a particular sitting government gets anywhere near this level of corruption, while this is only the beginning of its third year as a majority, since in minority one must be careful since one is on a constant knife edge. I think that is one of the most stunning aspects of this government, that the speed of its corruption as well as the brazen nature of it (being abuse of power in nature so much more than more traditional Canadian corruption money scandals, which while bad are not as dangerous) has set new records and not just for its depravity alas. The Harper(tm) government has certainly been a historic government of change alright, just not the change it promised. I remember laughing with contempt and derision back in 2005-2006 when I kept hearing about the "clean cut Conservative government" we would see from Harper and the CPC, because I knew and warned that this would be the reality, and I believe I was generally branded a hysteric for thinking/saying so. Well yet again the curse of Cassandra lives on, although given a choice if I had it of being proven correct or being proven to be massively deluded I would have honestly preferred the latter, as the health of my nation and its governing structures really matter more to me than being correct.

Some of us really do care more about the fundamental system and process issues than any party, leader, or political ideology, because without the underlying framework you have nothing. It was always here that I most feared Harper would be the most damaging, and lo and behold he managed to exceed my expectations. Though I didn't think he would manage to get to this level of damage until near the end of his first majority government, to do so not quite halfway through (since a government can go up to 5 years) underscores just how much worse he truly is and always was as a person to lead this nation, especially given his decades long track record of contempt for Canada's basic governing structures and precedents. After all how can you truly govern and lead well something you have such naked contempt and even hatred for? Simple answer, you can't, and you get what we have been seeing all along. But then given the CPC's heritage of being birthed in treachery and betrayal by MacKay and Harper one should not be at all surprised, just disgusted.

There is a reason I never refer to this party as Tories or the PC's, because not only are they not they actively hold in contempt Toryism and the PCPC history/legacy and I believe in truth in advertising (which also means I find advertising a program not only not in existence but not even agreed upon with the Provinces nor legislation introduced for to be particularly infuriating just on the basic good government level). I honestly believe that if people had never started calling this party the Tories or the PCs it would have seriously limited their ability to rise to majority government, because for most voters who are unaligned their basic understanding of political reality was that the differences between Liberals and PCPCs/Tories was fairly limited (which was when the Libs Tories same old story routine of the NDP still had some connection to reality as opposed to its complete disconnect since the rise of the Harper CPC) which is IMHO the real reason they were able to come to power. For that I do hold the national media at fault, because they took the easy and sloppy way to describe them instead of the factual reality way, which is another issue I have with the national political media of this country, but that is a whole other series of rants for another time and place.

Thanks for the heads up, Anon. I hadn't even noticed it. Completely inappropriate.

@ Scotian. I think what you're seeing here is the result typical of a sociopathic executive whether a CEO, head of a law firm, or a prime minister.

We should have known Harper was bent when he removed all the portraits of former prime ministers from the Commons foyer and replaced them with photos of himself. That sort of rank narcissism is a hallmark of sociopathy.

When you take a sociopathic prime minister and you give him a powerful, unaccountable and secretive apparatus like the Prime Minister's Office, how can the PMO not wind up corrupted? It's the perfect vehicle for effecting, beneath the table, every corrupt act the prime minister cannot risk being caught doing himself. The temptation to use it is irresistible to someone like Harper.

Stephen Harper is a master of liability cut-outs and plausible deniability. If you're the chief of staff and you get caught doing his dirty work, you fall on your sword, they haul your body out and they find your replacement.