A Call to Cull - Waterfront Homes, That Is. 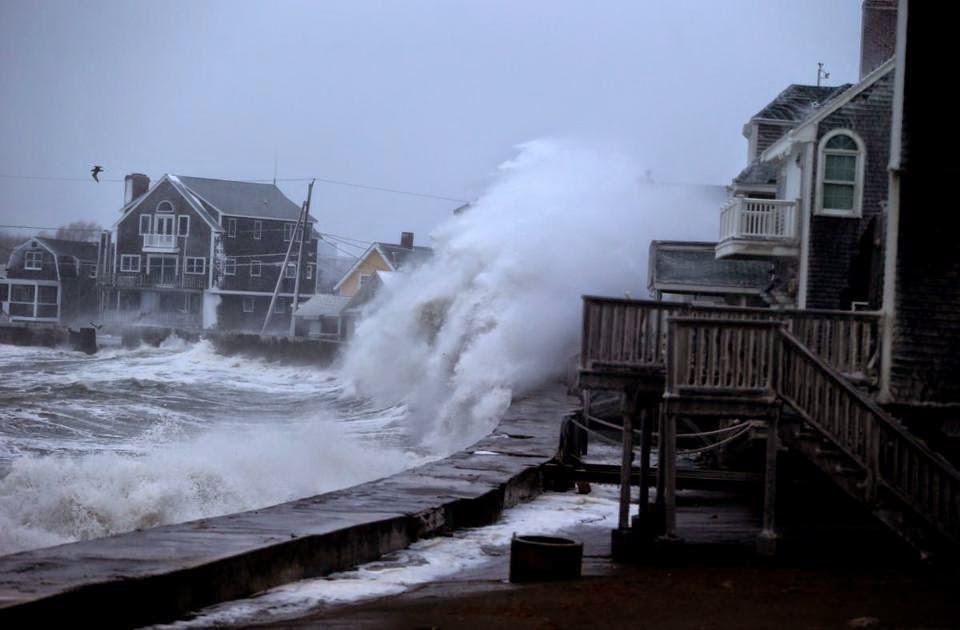 There's a name for many splendid waterfront homes in Massachusetts.  They're called "severe repetitive loss" properties and critics are beginning to say enough is enough, tear'em down.

The owner of 48 Oceanside Drive had just repaired her $1 million vacation home from a devastating 2013 storm when the Atlantic came crashing through a giant picture window last month. The Jan. 26 blizzard marked at least the 10th time the house has been damaged in four decades — and probably the 10th time it will be rebuilt, in part with taxpayer dollars.

Scituate is the front line in New England’s expensive, losing battle against the sea. The coastal town, with few offshore barriers to curb a storm’s fury, accounts for nearly 40 percent of Massachusetts homes and businesses that are so flood-prone the federal government calls them “severe repetitive loss” properties.

Nearly all of these estimated 150 properties in the town of 18,000 have received at least four payments from the federal flood insurance program over the years, meaning federal taxpayers have helped foot some of the reconstruction bills. Though property owners pay for flood insurance, the program is in the red and relies on billions from the federal government to stay afloat.

And the flood risk is getting worse as sea levels gradually rise. For decades, Boston averaged one or two sea water floods per year, based on the city’s tide gauge, and three floods annually in the 2000s. This decade, Boston is averaging around nine days of flooding a year, according to the National Oceanic and Atmospheric Administration.

What to do, what to do?  A lot of those homeowners are wealthy.  They contribute money to political campaigns and they vote.  I know, let's buy their houses for way more than their flood-prone actual value.

They've got powerful friends in Congress, powerful enough to resist reforming the federal flood insurance programme.  There was a move afoot to raise premiums to cover outlays, to make it self-financing.  After all, anything else would be pure socialism, in this case making the poor cover the repetitive losses of the rich.

Why the rearguard action in Congress?  Because, put on a self-financing basis, the insurance premiums on many waterfront houses would jump to $15,000 a year or more.  That eliminates a lot of potential buyers when it comes time to sell, if you can sell.  And it makes mortgage lenders very, very nervous.  So these rich folks stand to lose a ton of money in property value alone if their flood insurance isn't massively subsidized.

Sooner or later those flood insurance premiums will have to skyrocket so, accepting the inevitable, it's better to bail out now if you can get government to write you a generous cheque.

Your home may be nominally worth millions but, if it gets hammered by storm surge and sea level rise every few years that will only worsen with each passing decade, it's really worth close to nothing.  That will never do.

Government subsidies for vacation homes. That makes sense. Not.

What is it about lakes, rivers, streams and oceans that make people stupid? Doesn't a town named High River tell them anything important?

It's a growing problem that Canadian governments, at all levels, will have to address, Toby.

In my town we have some low-lying, flood prone areas. I spoke with the city engineer who said there are now properties where no future building permits will be issued. Not so much as a new garden shed will be allowed.

Sea level rise should be the provincial government's remit but they've run from it, leaving the whole thing to the municipal level. That means there's no coherent strategy, no uniform policies for coastal towns and cities. Every place for itself as far as Victoria is concerned.

Then again with so much ridiculously costly waterfront property in the Lower Mainland I can see why someone like Christy Clark would treat the whole thing as a hot potato.


Re
In my town we have some low-lying, flood prone areas. I spoke with the city engineer who said there are now properties where no future building permits will be issued. Not so much as a new garden shed will be allowed.

This is good news; the penny has dropped.
I think that a municipality that allows building in a flood plain or avalanche area are liable as long as they collect taxes!!
More fool the taxpayer that allows such practices.

This is the start, Anon, of a retreat from the sea that will pick up steadily, especially in the U.S. Although Canada has far more coastline, a lot of it is sparsely inhabited. Still in the populated estuaries, like the Lower Mainland of Greater Vancouver, we'll feel the hit eventually.