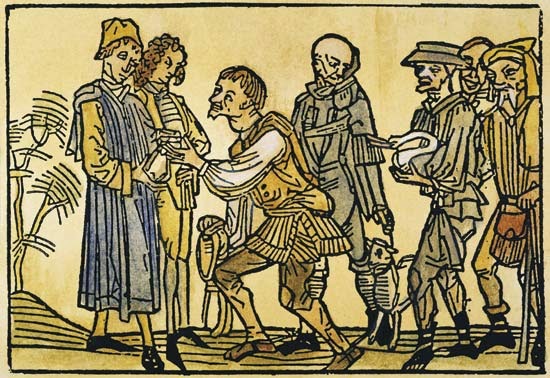 There has always been a struggle between labour and capital.  In feudal times, labour was on the losing end, big time.  For most it was a brutal, nasty and short life.

Democracy changed that, in part from the transfer of political power from the hands of the few to the many, the great unwashed if you like.  The technology era and rise of unions leveraged egalitarian democracy to likewise shift the balance of economic power, at least in part.

That's over now, at least according to Robert Reich who argues that the wealthy have pulled America back to the 19th century.


A Forbes Magazine contributor ...writes that jobs exist only “when both employer and employee are happy with the deal being made.” So if the new jobs are low-paying and irregular, too bad.

Much the same argument was voiced in the late nineteenth century over alleged “freedom of contract.” Any deal between employees and workers was assumed to be fine if both sides voluntarily agreed to it.

It was an era when many workers were “happy” to toil twelve-hour days in sweat shops for lack of any better alternative.

It was also a time of great wealth for a few and squalor for many. And of corruption, as the lackeys of robber barons deposited sacks of cash on the desks of pliant legislators.

Finally, after decades of labor strife and political tumult, the twentieth century brought an understanding that capitalism requires minimum standards of decency and fairness – workplace safety, a minimum wage, maximum hours (and time-and-a-half for overtime), and a ban on child labor.

We also learned that capitalism needs a fair balance of power between big corporations and workers.

Today there is a logic disconnect that has become pervasive in politics and in the commercial sector.  The future has been discounted to near irrelevance.  Posterity is out the window and, with it, the need for balance between capital and labour.

In my Baby Boomer lifespan I have never known governments so anti-labour as today's.  I have never known a society as mortally divided, confused and powerless as today's.  Step by step by step we, the majority, have been politically and economically dismantled in the process of usurping what had been our political and economic power and transferring it to our 'betters.'

A modern, vibrant and robust society cannot exist in this matrix but that may be the objective of those who would have us revert to the 19th century and those in high office who now do their bidding.  That may be the essence at the core of our neoliberal transformation into, first, illiberal democracy (where you still get to vote but it matters less and less), and, ultimately, oligarchy.   And the decay in our democracy and our nation's decline into a police state are very much integral to that process.

...since around 1980, even though the economy has doubled once again (the Great Recession notwithstanding), the wages most Americans have stagnated. And their benefits and working conditions have deteriorated.

This isn’t because most Americans are worth less. In fact, worker productivity is higher than ever.

It’s because big corporations, Wall Street, and some enormously rich individuals have gained political power to organize the market in ways that have enhanced their wealth while leaving most Americans behind.

That includes trade agreements protecting the intellectual property of large corporations and Wall Street’s financial assets, but not American jobs and wages.

Bailouts of big Wall Street banks and their executives and shareholders when they can’t pay what they owe, but not of homeowners who can’t meet their mortgage payments.

But less tolerance toward labor unions — as workers trying to form unions are fired with impunity, and more states adopt so-called “right-to-work” laws that undermine unions.

We seem to be heading full speed back to the late nineteenth century.
Posted by The Mound of Sound at 9:48 AM

Sometimes, I wonder, did the instability of the 19th century led to much of the turmoil the world experienced in the early 20th century?
It was as though everything that had happened in the 19th century had crescendoed into World War 1, and then WW2.
I don't which history books these rich buggers have been reading, but the 19th century was a century of unrest and instability, with nations rising and falling at a rate we haven't ever experienced in our own lifetimes.
Although we're likely to begin experiencing this roller coaster of history, soon enough.
The powerful have been preparing like crazy to face unrest, but even in historical times, having a ready and willing militia to put down strikes and protests may never be enough. The more violence the powerful use to claw onto their power, the better organized the oppressed become.
The decades ahead do not look a nice time to come.

Hi, Troy. I look around and consider everything from regional arms races to global food security, inequality, terrorism and nuclear proliferation - the things we are dealing with and all the problems we're ignoring and when I look to the future I see not much more than chaos.

Neo-lberalism has always looked to the past -- and, if we went back past the Magna Charta, our masters would be dancing in the streets.

MoveOn.org
6 hrs ·
What do you think?
h/t Represent.Us & Washington Post
A piece about the Koch brothers largest American lease holder of Canadian Tar Sands. The Koch brothers just pledged $900 million to support conservative politicians in the 2016 eletions. ...and so on also calling for decreased in Social Security.Anyong

I have seen indications that with regard to workplace safety we are headed back to acceptance of the principle of "volenti non fit injuria".

Christ, John, I haven't heard that since law school. Surely workplace safety is a regulatory matter between the state and the employer. Volens is, of course, a defence to a tort. Hard to imagine how that could apply to workplace safety unless the state completely abandons its jurisdiction. That'd be pretty radical stuff.

@ Anyong. Check out the piece I just posted about Sheldon Adelson and how he's pulling the strings in the US and Israel.