This is Canada. Of Course We Live In a Democracy. Right? Think Again. 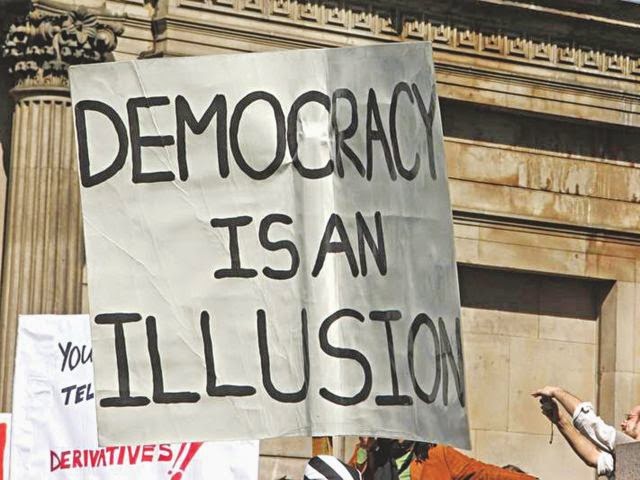 Do you know the difference between liberal democracy and illiberal democracy? It can be a complex issue.  There are oodles of papers to read if you really want to get a handle on it but, for now, here's a somewhat useful explanation taken from Wiki.

An illiberal democracy, also called a pseudo democracy, partial democracy, low intensity democracy,empty democracy or hybrid regime,[1] is a governing system in which, although elections take place, citizens are cut off from knowledge about the activities of those who exercise real power because of the lack of civil liberties. It is not an 'open society'. There are many countries "that are categorized as neither "free" nor "not free," but as "probably free," falling somewhere between democratic and nondemocratic regimes."[2] This may be because a constitution limiting government powers exists, but its liberties are ignored, or because an adequate legal constitutional framework of liberties does not exist.[3]

There's no neat definition, no universal litmus test, that reveals illiberal democracy but, make no mistake, it's spreading quite fast around the world and it will come to impact our everyday lives.  It intends to do just that. It may begin as a barely noticeable disorder, a political irritation leading to indignation, steadily worsening but only incrementally at worst, before it becomes established as a national, constitutional affliction.

The United States has, in many aspects, become an illiberal democracy.  Its dysfunctional, "bought and paid for" Congress is a manifestation of this.  The United States Supreme Court with its outrageous rulings such as Citizens United is another telltale.  The influence of shady operators like the Koch Brothers and Sheldon Adelson leave little doubt that government "of the people, by the people, for the people" has been reduced to a quaint and dispensable notion.

Washington State has documents outlining emergency response plans for a Kinder Morgan pipeline – plans similar to those British Columbians have been told by Canada’s National Energy Board they’re not allowed to see due to security concerns.

The B.C. government lost a battle with the National Energy Board in January to have greater access to Kinder Morgan’s Trans Mountain pipeline emergency response plan (ERP). Kinder Morgan had already provided B.C. with a version of the plan, but significant portions were blacked out.

The denied information included specific response times, valve locations, and evacuation zone maps. The government had argued it needed the entire plan to be able to understand Kinder Morgan’s ability to respond to an oil spill. The proposed $6.5-billion Trans Mountain expansion would twin the pipeline and triple the capacity for Alberta oil intended for Asian markets.

But in Washington State – where the pipeline would cross through to Puget Sound – Kinder Morgan has provided a more comprehensive response plan.

...The U.S. plan includes information on response timelines, the availability of emergency equipment near specific pipeline sections, and a list of companies that could help out after an oil spill.


In HarperLand, Washington State can compel disclosure from American pipeline operator, Kinder Morgan, but the utterly rigged, completely Harperian National Energy Board will block British Columbia from demanding that same information. That's the glaring, ugly face of illiberal democracy in Canada.  The dice are loaded, the deck is stacked - we haven't got a chance.

Yes, we still get to vote every now and then but, in the aftermath, government operates behind closed doors.  Harper was onto that from the get go, severing the public's and the media's access to the public service, the armed forces to boot, and thereby quietly transforming them into the prime minister's personal, partisan political agencies.  This veil of illiberal democracy descended over Canada upon Harper's first minority win and remains even stronger today.  The media whined and whimpered for a while but they've long been tamed.  Even our opposition parties, those who tell us they would like to run the country, go along with it.

I've never heard of a nation existing on the basis of going along to get along. Maybe that's because they tend to die off early.,

Its not a Democracy any more Mound, its a mushroom farm.....They keep us in the dark and feed us a lot of horseshit!

Rural: BEST comment EVER!!
I'm in full agreement.
Of course, if we agree on too many things, does that mean we're colluding with intent to disrupt the economy, making us ipso facto terrorists in the eyes of Emperor Steve?

Yes, you're both on the government 'watch list' now.