The Danger of the Lone Wolf 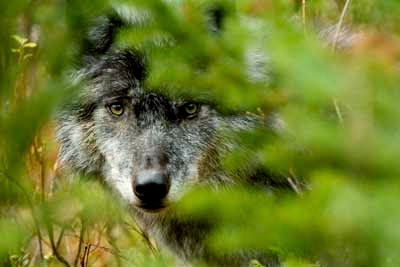 Canada's had its share of lone wolf terrorism.  In fact, most of the worst incidents have been the work of lone wolf terrorists.  They're loners, often unhinged and looking for whatever "cause" they can latch onto.  Then they grab a gun or a car and make headlines for opportunistic politicians like our prime minister to exploit, aided and abetted by a spineless opposition.

Matthew Harwood, writing for TomDispatch, warns that, when it comes to the lone wolf, the cure can be worse than the disease.

There’s only one problem with the rising crescendo of alarm about lone wolves: most of it simply isn’t true. There’s nothing new about the “threat” and the concept is notoriously unreliable, as well as selectively used. (These days, “lone wolf” has largely become a stand-in for “Islamic terrorist,” though the category itself is not bound to any specific ideological type.) Worst of all, its recent highlighting paves the way for the heightening of abusive and counterproductive police and national security practices, including the infiltration of minority and activist communities and elaborate sting operations that ensnare the vulnerable. In addition, the categorization of such solitary individuals as terrorists supposedly driven by ideology -- left or right, secular or religious -- often obscures multiple other factors that may actually cause them to engage in violence.

Like all violent crime, individual terrorism represents a genuine risk, just an exceedingly rare and minimal one. It’s not the sort of thing that the government should be able to build whole new, intrusive surveillance programs on or use as an excuse for sending in agents to infiltrate communities. National programs now being set up to combat lone-wolf terrorism have a way of wildly exaggerating its prevalence and dangers -- and in the end are only likely to exacerbate the problem. For Americans to concede more of their civil liberties in return for “security” against lone wolves wouldn’t be a trade; it would be fraud.

...In the media and in recent academic studies, what separates the lone-wolf terrorist from the phenomenon in general is the perpetrator. Lone wolves are, by definition, solitary individuals, almost always men, often with mental health problems, who lash out violently against civilian targets. At least in some fashion, they are spurred on by belief. Researcher Michael Beckerdefines it this way: “Ideologically driven violence, or attempted violence, perpetrated by an individual who plans and executes an attack in the absence of collaboration with other individuals or groups.” Although you wouldn’t know it at the moment in America, the motivation for such attacks can run the gamut from religiously inspired anti-abortion beliefs to white supremacism, from animal rights to an al-Qaeda-inspired worldview.

According to the literature, lone wolves are unique in the annals of terrorism because of the solitariness with which they plan and carry out their acts. They lack peer or group pressure and their crimes are conceived and executed without assistance. In this way, they bear a strong resemblance to the individual school shooters and rampage killers that Americans are already so used to.

...the methods that the police and national security state seem to be exploring to deal with the issue -- like trying to determine what kinds of individuals will join terrorist groups or profiling lone wolves -- won’t work. The reasons individuals join terrorist groups are notoriously complex, and the same holds true for politically violent people who act alone. After reviewing those 119 lone-wolf cases, for example, the researchers concluded, “There was no uniform profile of lone-actor terrorists.” Even if a “profile” were to emerge, they added, it would be essentially worthless: “[T]he use of such a profile would be unwarranted because many more people who do not engage in lone-actor terrorism would share these characteristics, while others might not but would still engage in lone-actor terrorism.”

As a group, such solitary terrorists differ from society at large in one crucial way: almost one out of three had been diagnosed with a mental illness or personality disorder before engaging in political violence. Another studyconcentrating on 98 U.S. perpetrators found that approximately 40% had recognizable mental health problems. The comparable figure for the general population: 1.5%.

...Because such individuals don’t have a larger network of financing and training, and may be disturbed as well, they are likely to have a far less sophisticated skill set when it comes to arming themselves or planning attacks. Terrorism researcher Ramon Spaaij of Australia’s Victoria University created a database of 88 identified lone wolves who perpetrated attacks between 1968 and 2010 in 15 countries. What he found should dispel some of the fear now being associated with lone-wolf terrorism and so the increasingly elaborate and overzealous government planning around it.

Spaaij identified 198 total attacks by those 88 solo actors -- just 1.8% of the 11,235 recorded terrorist incidents worldwide. Since lone wolves generally don’t have the know-how to construct bombs (as the Unabomber did), they usually rely on firearms and attack soft, populated targets, which law enforcement responds to quickly. Therefore, Spaaij found that the average lethality rate was .062 deaths per attack while group-based terrorists averaged 1.6 people per attack.

...As an American, the chance that you’ll die in any kind of terrorist violence is infinitesimal to begin with. In fact, you’re four more times likely to die from being struck by lightning. If anything, the present elevation of the lone-wolf terrorist to existential threat status in Washington creates the kind of fear and government overreach that the perpetrators of such attacks want to provoke.

If individual terrorists are the “new nightmare,” it’s only because we allow them to be.

Harper is on a roll with this.  It may be his best bet of winning the next election. What's sad is our lickspittle NDP and Liberal opposition.  There's a huge leadership vacuum here.  We need leaders who restore our confidence and courage, who bring us together, who put this minuscule 'threat' into clear perspective.  Instead we're beset by Liberal loudmouths who, perhaps intentionally, defend Harper's national security excesses and accuse those who don't of being soft on terrorism.

We need a new type of leadership, the sort on offer only in Elizabeth May.

I imagine that you share my suspicion, Mound, that the reason the Harper-directed RCMP refuse to release either the videotape or the transcript of Michael Zehaf-Bibeau's 'manifesto' is that they would reveal the Parliament Hill attack was, in fact, perpetrated by the type of deranged wolf described in your post.

Too bad the matter seems to have dropped from the public, and the opposition's, attention.

You know, Lorne, I haven't even bothered to memorize any of their names because, to me, they're inconsequential. These guys do fit the lone wolf mould. Yet we respond as though a brigade of ISIS fighters had rampaged through Ottawa.

Presumably the most dangerous "lone wolf" terrorists would be ones with military training, who have the skills needed to successfully kill.

Combine that with the profile of lone wolf terrorists as very often people with diagnosed mental health problems, and it seems to me that clearly the single policy that would most effectively cut the potential death toll from "lone wolf" terrorism would be:

Strengthening services, particularly mental health related support, for veterans!
That is, the one policy that for whatever reason Harper seems most virulently opposed to.

Agreed, PLG. I did my undergrad in the States during the closing years of Viet Nam. How many realize that far more veterans of that war died of their own hands at home than were lost of enemy action? When they did kill someone else it was usually at home or at their work place. I don't know that PTSD is much of a terrorism trigger. Still we do owe our vets ready access to first rate mental health services.