When Getting It Wrong No Longer Matters 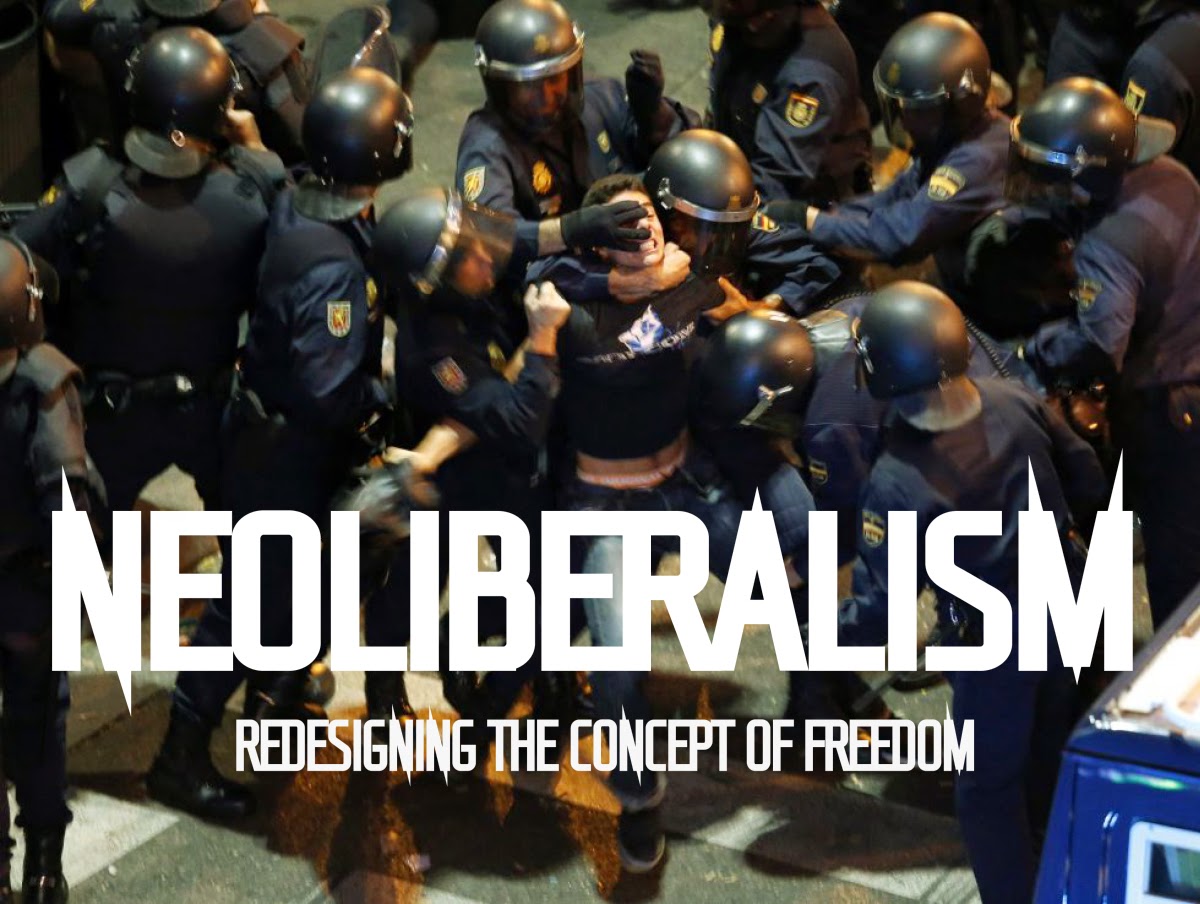 In the age of neoliberalism ideology matters, not results.  Neoliberalism ensures there'll always be another bus to drive into the next ditch.

Call it what you like, be it "market fundamentalism" or "free market capitalism," neoliberalism works at cross purposes to democracy.  You know that business about government "of the people, by the people, for the people"?  There's really no need for that sort of pap in the age of neoliberalism.

Neoliberalism displaces unruly democracy, the sort of thing that demands results and punishes failure, with an orderly form of corporatism where some things matter and others are ignored or suppressed or even attacked.  There are plenty of examples.

The environment, climate change.  In a government "of the people, by the people, for the people" this would be a big deal.  It's akin to a 3-alarm house fire for all of humanity.  Something is blocking action.  What do you think it could be? Neoliberalism?  Well, look at the governments that have been subverting every effort to slash greenhouse gas emissions, notably the United States and Canada. The United States, with its "bought and paid for" Congress and wildly corporatist Supreme Court and its soaring inequality.  Canada, with its corporate executive prime minister, our CEO, calling the shots on everything, demolishing our rights, our freedoms and our protections.  Who so relentlessly suppresses science but Stephen Harper, some Salafist Mullahs and the Khmer Rouge? Oh dear.

Inequality, perhaps the hallmark of neoliberalism.  Who needs a wealthy country if the price is a healthy, robust and empowered middle class?   With their middle class incomes and their unions and associations and their doting concerns for the welfare of their kids and grandkids, they operate as a sponge, absorbing the lion's share of political and economic influence.  All that political and economic power, that clout, however can be commodified and sold to a markedly higher bidder in the age of neoliberalism.

The emergence of the "Permanent Warfare State" is the poster child of neoliberalism.  We have entered an age of for-profit, corporate war fighting.  As usual, the United States leads the way paved by giants such as Halliburton, Blackwater and Kellogg Brown & Root. In Afghanistan, these "contractors" not only operated outside any authority's laws but outnumbered American military personnel in that miserable country.

Warfare in the age of neoliberalism revolves around the "whack-a-mole" strategy.  Consider it a form of "low-intensity fraud."  Wars, in times past, usually ended in one of two ways. You won or you lost.  If neither of those was available then you sat down and negotiated some form of truce.  You did it because people want peace.  They want to get on with their lives.

Look how our war in Afghanistan ended.  We packed up our stuff in shipping containers and left.  There was no concluded outcome.  We simply withdrew from the field (which, by the way, is losing).

Bombing, death from above, is particularly appealing in the age of neoliberalism. We have plenty of ways to keep that churning over - drones, bombers, cruise missiles, strike fighters.  Harper likes it so much he's fond of dispatching penny packets of jet fighters hither and yon.  If he wants to be a part of something, he'll get a six-pack of CF-18s there in no time.

The thing is, in the age of neoliberalism, getting it wrong no longer matters.  Our military and political leadership failed miserably in Afghanistan but nobody was sacked, no careers were ruined.  What's more telling is that, when we got back home, there was no post-mortem.  No enquiry.  No discussion of why the Taliban prevailed over us.  No exploration of what went wrong and just who made all the terrible calls.  Good people died - for nothing - but in the neoliberal era, that no longer matters.  Their dead and broken bodies are bookkeeping entries.  We have moved on.

Libya.  We got together with our NATO pals and rained death from above on Gaddafi's troops for - One Hundred and Sixty One days - leaving the place in utter chaos.  We created the conditions that allowed Islamic fundamentalists to become established in North Africa, first al Qaeda and, more recently, ISIS (naturally).  Now our defence minister, our Closet Clausewitz, muses about expanding our neoliberal air war to Libya - again.  Why do I keep thinking of Groundhog Day?

We're seemingly confronted by threats on all sides these days - Putin, ISIS, al Qaeda, Iran, North Korea.  NATO is dusting off the cobwebs and eagerly preparing for Cold War II, relentlessly hyping the idea of a full-blown shooting war with Russia.  In August, the leading German financial paper, Handelsblatt, warned we in the West are being "mentally mobilized for war."  These same clowns, the very people who couldn't defeat an outnumbered gaggle of illiterate Afghan farmboys armed with Korean war vintage small arms, are banging the war drums over Russia.  Putin has become NATO's "indispensable enemy."  Fire up the foundries. We need more guns.

Warfare in the age of neoliberalism. It's not a total loss. Keep it stoked and you can keep the public fearful and fear is the fuel of manipulation.

Domestically, neoliberalism marks the subordination of public policy to economic policy.  Neoliberalism advances illiberal democracy over liberal democracy.  It results in transactional government in which even the plebs are cast as taxpayers, not citizens.  The connection between government and citizen falters as government quietly retreats from the public square.  Politics are waged on wedge issues and lies, not competing visions. Posterity is discounted to the point of irrelevance.  There is no room for government "of the people, by the people, for the people" for there is no "people" - no community united by common interests - but, instead, a badly fractured, confused and deeply divided society maliciously rendered impotent by the fog of fear mongering, slander and appeals to our darkest, basest instincts.

Neoliberalism shifts political and economic power from labour to capital. Government withdraws and yields rights and powers once associated with sovereignty to the forces of market fundamentalism.  Rights are negotiated away without consultation with the citizenry to whom they truly belong.  The public is defrauded by a political caste no longer in their service.  They do this because getting it wrong no longer matters.  There is no longer a power in the populace to be feared.

The road to neoliberalism is straight and it runs entirely to the right.  The measure of how far our political villainry of all stripes has gone down that road is disturbingly apparent by comparing their political alignment before 1970 to where it stands today.

What had been conservative has now morphed so far into the extreme right as to bear no resemblance to conservatism, none.  What had been liberal has journeyed far into the realm of conservatism, purged of its last vestiges of anything remotely progressive.  What had been socialist, as we once knew the New Democrats, is now extinct, suffocated by centrism.  All of this has happened beneath the blanket of neoliberalism. Sure we haven't fallen as low as the United States but, in fairness, we're catching up with a vengeance.

One thing is certain.  Neoliberalism has taken hold and it has the grip of a political limpet.  It won't be letting go until society is gutted and collapses or we come to our senses and pry it loose.  That may not happen until "we, the people" take to the streets with pitchforks and torches.  They know it.  Not for nothing have they crafted today's surveillance state in which even democratic dissent can be cast as subversive, a form of terrorism.

Post Script.  If you think my assessments border on hyperbole, do both of us a favour.  Go back a century to 1910 and the small farming town of Osawatomie, Kansas.  It was there that the eminently conservative Republican, Teddy Roosevelt, delivered his "Square Deal" speech.  Read it.  It's eye-opening.  You may even find Roosevelt's words a bit shocking.  I guarantee when you finish you'll appreciate how utterly degenerate and ultimately destructive is the neoliberalism that infects our government today.

Email ThisBlogThis!Share to TwitterShare to FacebookShare to Pinterest
Labels: neoliberalism

Neoliberalism is a fairy tale. It is Ayn Rand's dystopia. The terrible part is that so many believe it to be an ideal. Remember the movie Wall Street? Gordon Gekko's greed is good speech? What so many did not understand was that Gekko was the bad guy.

How did we get here?

I think we surrendered, Toby, even if we didn't understand it at the time. We put our trust in the political caste, which I've renamed the "villainry", to do what was right for us and our country. As the United States plunged into neoliberalism during the Reagan years, Canada drifted along in her wake. Instead of resisting it, our politicians accepted it as an inevitability and they responded more or less as one straight across our political spectrum.

What once were multi-nationals became trans-nationals, effectively stateless and beholden to no nation. We had a window in which to respond to that, to fight back, but we stood mute as significant parts of our sovereignty were surrendered to entities over which we retained almost no control or even much influence.

Look at it this way, we are today trapped in an exponential growth economic paradigm that is suicidal. Even as we consume the Earth's resources at 1.5X their replenishment rate - a truly lethal dependency - we don't give it a second thought. That has become our orthodoxy and we won't see it questioned.

It's madness. That's all it is, madness.

A very thought-provoking and passionate essay, Mound. I really think that you should share it with a wider audience. How about submitting it to The Tyee or Rabble.ca?

That's very kind, Lorne, but this thing would take a lot of editing before it could be submitted anywhere. Right now it's sort of like answering the door in your bathrobe and old slippers.

As long as the message comes through I'm content.

I agree with Lorne. Hope you don't mind, Mound, but I linked to this over at Canadian Malcontent, right in the middle of the front page.

Click the Discuss link and it takes you into the forum. Another link brings the reader right back here for your full essay.

No, that's fine Toby. I don't mind at all. Whatever you like.