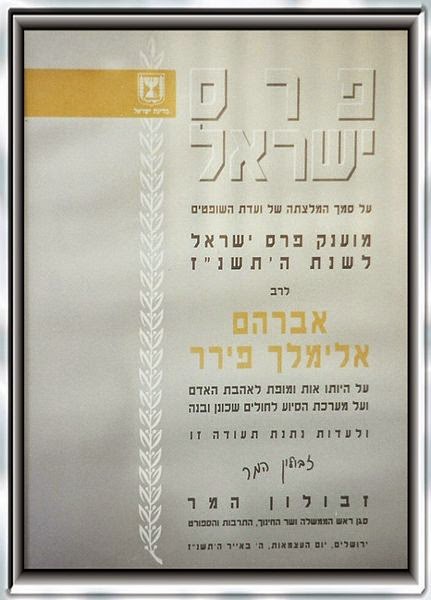 Bibi Netanyahu is at it again.  Maybe he got late night orders from his boss, Sheldon Adelson, who knows?  In any case Netanyahu has waded into the prestigious "Israel Prize" competition by blocking the appointment of three prominent judges who aren't politically acceptable to the prime minister.

Set up to award excellence in the arts, science and broader cultural and social contributions, the Israel prize is one of the country’s most venerable intellectual institutions. Inaugurated in 1953, it is handed out on Israel’s Independence Day with a $20,000 award in each category.

Since it was revealed this week that the prime minister’s office had intervened to block two judges for the literature prize and one for the theatre award the prize has been plunged into an escalating row, with Netanyahu publicly accusing some prize judges of being extremists and “anti-Zionists” who award the honour to their friends.

The intervention by Netanyahu’s office is understood to be the first time a senior Israeli government minister has intervened to remove the prize’s judges for political reasons.

“The composition of the panel that selects Israel prize laureates must be balanced and faithfully reflect the various streams, positions and strata of Israeli society [as I see it],” Netanyahu wrote on his Facebook page.

“However, over the years, more and more radical figures, including anti-Zionists – for example, those who support refusal to serve in the IDF [Israel Defence Forces] – have been appointed to the panel and too few authentic representatives of other parts of the nation …

“The situation in which a small and closed group, which holds extremist views, has control of the selection of the winners of the Israel prize, must change.”

Not surprisingly, Netanyahu's interference has led a number of judges to quit in protest and several nominees to withdraw from the competition.

Speaking to the Guardian from New York, professor Nissim Calderon, chairman of the literary research prize committee, who stood down earlier, condemned the political interference as authoritarian, “hackery” and a blow to Israeli democracy.

“The background to this is that I believe that Netanyahu has entered a new phase. He is now attacking the intellectual community. He is not attacking that or this person.

“This is something that has never happened before. The Israel prize is considered the highest prize in the state. Whether it is the arts or chemistry or physics or mathematics or in research into literature or the bible, those who have got it have been respected by intellectual community.”

It's small wonder that Harper is so fond of Netanyahu given that they share the same, raw instincts and paranoia.  Wouldn't Harper love to have the power to define what represents an "authentic" Canadian?

I suppose it was inevitable that the longstanding Jewish tradition of respect for intellectual excellence and the fascist tradition of hatred for the same would come to clash in Israel.