A Trillion Dollars Worth of Stranded Assets 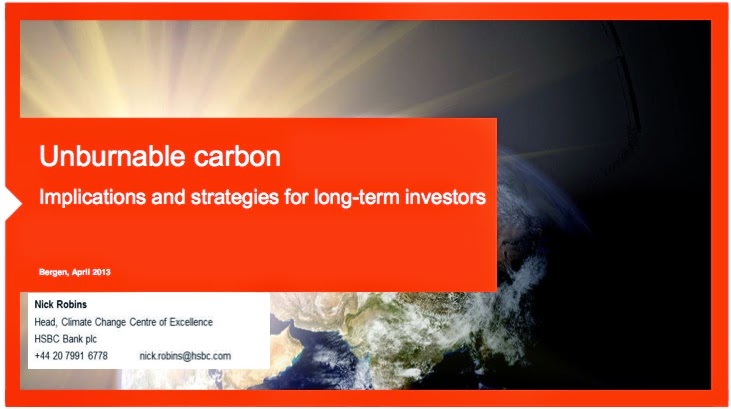 A stranded asset is any asset that gets hit by "unanticipated or premature write-downs, devaluations or conversion to liabilities."  These days the term is most commonly applied to high-cost, high-carbon fossil fuels that are simply going to have to be left in the ground, unexploited, if we're to have even a slim hope of avoiding catastrophic global warming.

We know that about 80% of known fossil fuel reserves are going to have to be left untouched.  Not all fossil fuels are equal.  Some are far more carbon-intensive than others, coal for example.  When it comes to petroleum options the high-carbon Bad Boy is bitumen and the first place that brings to mind is the Athabasca Tar Sands.  Among his vast litany of achievements, Stephen Harper stands as the poster boy for the Tar Sands.

The Carbon Tracker Initiative reports that energy companies are poised to spend over a trillion dollars in the course of the next decade on new projects in the Tar Sands, sea beds and in the Arctic, money that could go up in smoke if there's any realistic agreement to limit carbon emissions.

The new work connects the economics of oil production with the limit on carbon emissions needed to avoid dangerous climate change. It found that only the oil expected to cost less than $75 a barrel to produce, much of which is from conventional onshore wells, can be burned within the planet's 'carbon budget'. The analysts found even when focusing only on the high-cost end – oil costing more than $95 a barrel – $1.1tn was at risk from 2014-2025. Looking further ahead, to 2050, CTI estimated $21tn worth of high-cost oil projects could be wasted.

The region with the highest risk of wasted capital in the report was Alberta. Canada's vast oil sands province is expected to see $400bn of investment by 2025. The companies with the biggest exposure to risk there are Canadian Natural Resources Limited, Suncor and Shell.

While the report is somewhat speculative, the announcement today by Norway's sovereign wealth fund that it is dumping its investments in high carbon fossil fuels, especially coal and bitumen, isn't.  Norway is a huge player, both as a producer and as an investor.  Its divestment is going not to ripple but to recoil through energy markets.  Shareholders, who have already begun to question high-carbon investments, are going to press for their capital to be put into safer investments.  CEOs and directors who've so far held them at bay will today find themselves in a far more precarious position.