Oh, My God! What If We Got This One Completely Wrong? 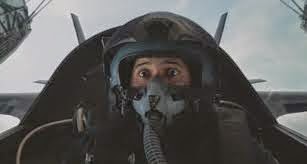 A recent article in Aviation Week claims that senior officers in the Pentagon are beginning to evaluate whether counter-measures already developed by the two obvious adversaries of the F-35 have seriously compromised its effectiveness.

The article explains that what is going on is preparation for what the staff of the next president will have to wrestle with.

What's most interesting is the part that deals with the Pentagon's obsolescence policy.  These same people are trying to catalog all the very good technology within the F-35 so that they can be incorporated into the next warplane, the one to be built to correct all the F-35's mistakes. That's the history of the evolution of warplanes.  You progress from two wings to three to just one; from air-cooled to liquid-cooled engines to jets; from canvas covered surfaces to metal covered; from straight wing to swept; from rifles to machine guns to precision-guided bombs and radar-guided missiles.

Progress is a process.  You take what works and quickly find new ways to do what doesn't.  The point has been made all along.  This overdue, over-priced and under-performing warplane is very prototypical.  It's more a technology demonstrator than a well-rounded warplane.  Lockheed may boast that the F-35 is at the leading edge of 5th Generation fighter technology but, if that was true, it would have to be Generation 5.0 Beta.  They got some things very, very, brilliantly right.  They got as many things very, very wrong and they haven't distinguished themselves in how they've dealt with those shortcomings.

Before we, and our allies, get saddled with what might be a lame horse straight out of the gate, we need to get reliable intelligence on whether the F-35's vaunted stealth cloaking, for which it compromised speed, agility, range and payload, remains valid and for how long?  Lockheed isn't going to provide us with F-35s we can stage at Cold Lake along with all the other warplanes worth looking at so that we could have a legitimate fly-off.  Since we're not getting the option to kick the tires, at the very least we need to know if this hyper-expensive warplane has already been neutralized.  The Pentagon wants to know - and prepare for the possibility - and we should too.

With the sort of money it costs to build a modern fighter, you really can't afford to get it wrong.  Once you own it, it'll be a 'come as you are party' for the next 30+ years.

I have not lost such confidence in Canada to believe that, when the F-35's shortcomings are exposed, we will allow our aircrews to still use them as our front line, Swiss Army knife warplane.  We will, however, have to deal with a huge hole in our federal budget as we scrape up money to buy the next plane, the F-35's successor, the one that will have many of the best parts of the prototype but with the wrinkles ironed out.

The Harper government (Harper and MacKay especially) has spun so many lies about the F-35 that they no longer have any credibility.  They lied about cost. They lied by trying to claim there was a contract, one put in place by the Liberal government of Paul Martin.  The most preposterous of their lies is that the F-35 will be in front-line service with Canada for upwards of 50-years.

The Aviation Week article uses the term "cannibalize" to describe the process now underway.  Senior defense officials are looking to cannibalize the F-35 - to take from it all the best stuff and leave the rest on the hangar floor.  Yet we're expected to buy it warts and all.  What do you do if it turns out to be a flying wart?


Note - I've not been able to find the article online to link to it.  I can access it through a Zinio subscription.  It is published in the February 2 issue.
.
Posted by The Mound of Sound at 8:41 AM

Given the shortcomings, the ways around it and such, I find myself wondering . . . Is stealth worth it? On balance would it be more effective to build cheaper planes designed purely for performance, with shapes determined by what flies best rather than what minimizes radar detection?

There seems to be a consensus that stealth is a valuable attribute but not, of itself, the game changer once thought it would be. The F-35 discounts its shortcomings in range, speed, agility and payload, claiming they're offset by frontal-aspect only stealth cloaking. It wasn't a convincing argument at the outset and it's far less convincing today now that the intended opposition has had an extra four or five years to develop counter-measures.

While the American stealth is focused on defeating X-band radars there are other conventional radar bands for which it's far less effective. The 'other side' is developing multi-sensor detection systems covering broadband radar, infrared, optical and even acoustic scanning.

It's said that the Australian Jindalee radar technology is capable of detecting an aircraft's wake turbulence, something no aircraft can conceal.

It would be nice if the Harper government and the military would concentrate on the defence of Canada instead of these idiotic foreign ventures.

What Toby said. They could start by restoring funding to Search and Rescue - something that is critical to the people living in northern remote communities and on our coasts.