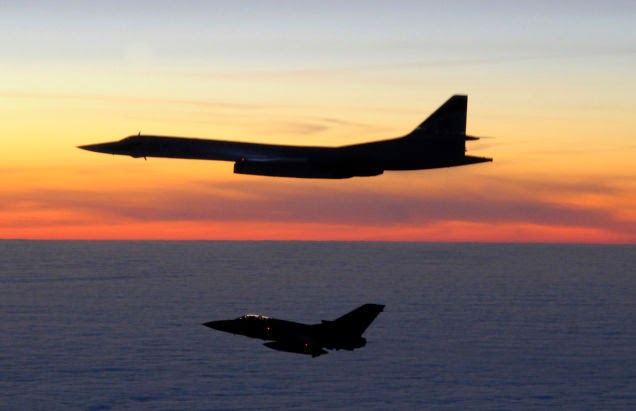 Vlad Putin has given NATO - well, nothing less than a reason to exist a little longer.

With the collapse of the Soviet Union, NATO was a headless chicken, running around aimlessly, still on its feet but just.  The North Atlantic alliance pretty much took whatever gig it could get.

NATO bombed Serbia to "liberate" Kosovo.  Don't ask how well that has gone for the Kosovors.  45% unemployment, rampant crime, a hopelessly corrupt government, that sort of thing.

NATO upped its game to jump into Afghanistan.  No need to ask how well that turned out.

NATO went back to bombing in Libya. a drawn out fiasco that helped oust Qaddafi, eventually, but also gave al Qaeda a golden window of opportunity to get established in North Africa and they made the most of it.  Today Libya is reeling, on the cusp of becoming a true failed state.

Now NATO's real members are busy playing aerial "whack-a-mole" in Iraq, lobbing bombs on ISIS which, according to some observers, is something of a replay of our campaign in Libya.

If NATO is becoming a bit gun shy it's for good reason.  Fortunately it has a friend in Vlad Putin.  The Russian has allowed NATO to do what it does best - glower menacingly.  No guns, no bombs.  We're not that stupid.  It's Ukraine after all or the remaining part of it.  Who in his right mind really wants a shooting war with Russia over Ukraine?  It's right on Russia's border.  They can pour in any time.

If NATO can't actually liberate Ukraine, it can use it as a pretext for a brand new Cold War, the very thing NATO does best.  Experience shows that's a very extended-run gig.  It can last for decades, the military equivalent of Wayne Newton in Vegas.  We get to patrol with our jets.  They get to patrol with theirs. We get to mass our tanks in their vicinity and they mass their tanks along ours. Our subs go here, theirs go there.  We're all getting new missiles, subs and nuclear warheads anyway so the timing is near perfect.

Let the games resume.
Posted by The Mound of Sound at 9:47 AM