Remember that Mysterious Crater in Siberia? 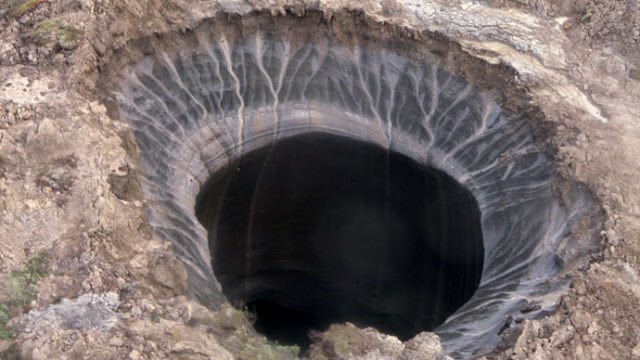 It caused a world wide uproar when a helicopter crew in Siberia overflew a massive crater in the permafrost in the summer of 2013.  Within a week or two a couple of additional craters were found.  Then the whole business died down.

Well, they're back, and there are a lot more.

Siberia’s Yamal Peninsula, which means ‘end of the world,’ is becoming increasingly porous, according to scientists at the Russian Academy of Sciences (RAS). Last July, a sinkhole measuring 260 feet in width was reported in the region. Researchers now suggest that up to 30 more could litter the cold earth.

Since the discovery of the first Yamal crater, nine more have been reported in the region. Additionally, the crater known as B2 is apparently flanked by 20 water-filled “baby craters,” the Siberian Times reports.

Whatever is creating these chasms is still largely unknown. Some Antipayuta residents reported seeing a flash in the vicinity of one crater, while others in the Yamal district noted feeling tremors. Russian scientists have named one possible culprit, however: methane.

Bogoyavlensky suspects that gas emissions – possibly even gas explosions – could have formed the craters. A thaw of the Arctic landscape could have allowed underground gas reserves to burst outward, he says. Researchers have previously observed ‘degassing’ in Yamal lakes – the release and subsequent rising of gas from lakebed – which seems to support Bogoyavlensky’s theory.