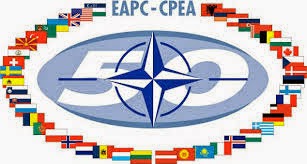 If you thought you had heard the last of insanely bellicose Anders Fogh "Foggy" Rasmussen when his term as NATO secretary-general lapsed, you were wrong. He's back and he's talking war again.


“This is not about Ukraine. Putin wants to restore Russia to its former position as a great power,” he told The Telegraph.

“There is a high probability that he will intervene in the Baltics to test Nato’s Article 5,” he said, referring to the solidarity clause that underpins collective security.

“Putin knows that if he crosses the red line and attacks a Nato ally, he will be defeated. Let us be quite clear about that. But he is a specialist in hybrid warfare,” he said.


The fear is that the Kremlin will generate a murky conflict in Estonia or Latvia where there are large Russian minorities, using arms-length action or “little green men” without insignia to disguise any intervention. This may tempt weaker Nato members to play down the incident, either to protect commercial ties with Russia or because of pro-Kremlin sympathies as in Hungary or Greece.

...Mr Rasmussen said there is no truth to Kremlin claims that the West violated pledges at the end of the Cold War that there would be no eastward expansion of the alliance into the territory of former Soviet Union. “No such pledge was ever made, and declassified documents in Washington prove this. It is pure propaganda,” he said.

No, Foggy, you lying shit, the propaganda is coming from you.  The pledge you dispute was given by George H.W. Bush to Mikhail Gorbachev to elicit Russia's agreement to the unification of Germany and the unified Germany's right to be a full NATO partner.  It has been confirmed by the third man in the room, Bush's Russia adviser, Princeton professor Stephen F. Cohen.  For daring to tell the truth of what those two men agreed to, Cohen is today being treated as Putin's stooge.

What a miserable cluster-fk, mind-boggling. However, Vlad is not entirely squeaky-clean . . .

I just hope that the tanks and arty stay where they are, because escalation would be Not Good, at the least.

You're right on the money there, Ed. Putin is a thug but I'm not sure if we toppled him (as many in Congress so fervently want) that we'd be happy with what we're left with. I think we can deal with Putin only not entirely on our own terms. We're marching to HIS border after all and the people of the Rodina have seen that before.

American hawks believe their own propaganda.

No one is more dangerous than a moron with an agenda, particularly if he is well armed.

My concern is that NATO and/or the U.S. will secretly stir up a conflict in Estonia and Latvia and will blame it on the Russians, just like they did in the
Ukraine. Rassmussen has no problem outright lying, which put me on guard, about what he really wants to achieve.