This Will Trigger the Great Northern Migration 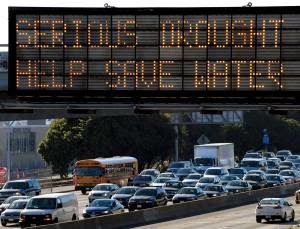 Fresh warnings about the prospects for mega-drought in the American southwest.

20, 30, 50 year droughts?  Factor that into America's desert cities where water is already scarce.

There's a lot that can be done - conservation, recycling of waste water, the development of drought-resistant crops - a lot, yes, but not enough.  Surface water is already in decline and ground water, aquifers, are being drained fairly rapidly.

One thing that's becoming a near certainty is that water is going to become very, very expensive in the southwest and that cost will reshape demographics.  People and businesses will have to decide whether to stay, and absorb the water cost penalty, or relocate to escape the drought.  An exodus would be chaotic and disruptive for those leaving and for those remaining behind.

Where has the water gone?  Well it's in the air, up in the atmosphere.  A warming atmosphere acts like a sponge to absorb water vapour.  The warmer the atmosphere the more water vapour will be lost through evaporation and transpiration.  That warmer, wetter atmosphere fuels more intense, severe storm events and phenomenon such as "atmospheric rivers."  An example of this is the Pineapple Express that has been lashing the west coast from San Francisco northward over the past month. c

We know what's coming.  Mass migration out of the south for which the Pacific Northwest will be Ground Zero.  Fortunately I'll not be around to see it.  For my kids, it could be a different matter.

Keep your eye on shares of companies like this one.

Here's a piece on climate change denial you might find interesting, Mound:
http://thinkprogress.org/climate/2015/02/13/3622819/new-york-times-skeptics-deniers/

@ Dana. Yes I've seen this sort of thing before including a cheap and very low-tech way to extract water from coastal fog banks. They all seem to require a certain low-level water vapour concentration and they're expensive. Not the sort of thing a "free water" economy is geared to.

@ Lorne. Thanks for the link. Unfortunately we're still a good way off from the day when these deniers will be cast as something akin to ebola carriers.

Then again, if speech deemed supportive of outfits our government considers terrorist is to be outlawed, why not add speech that is vastly more harmful to our civilization? Maybe we need to unleash our security apparatus on the denialist community.

There were Californians talking about water problems back in the 1960s. All proposed solutions were vetoed, either because they cost money or were thought to be icky.

Americans have been denying the demands of nature for so long it as if they live in Plato's cave or on Easter Island. I think that we will see deaths from drought in six figures before they get real.

I hope you're wrong,Toby. I really do. We're all coming up to that 'fish or cut bait' moment where we choose to act or allow ourselves to be overtaken by events. Unfortunately we've been groomed to perceive action as a burden rather than what it is, a final opportunity that, if not taken, could be foreclosed forever.