The Face of a True Oligarch 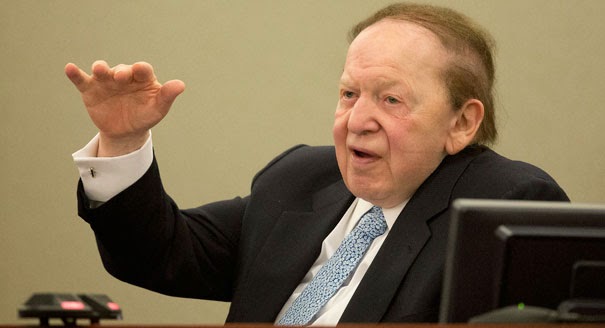 In the States, Republican presidential hopefuls grovel before him, each seeking his approval - and money.  In Israel, Benjamin Netanyahu does the very same. The man they all worship is kingmaker and Vegas casino tycoon, Sheldon Adelson.

The Israeli newspaper Haaretz even speculates that the upcoming elections were called by Bibi Netanyahu as a favour to Adelson.

What is different about this election campaign is that this time, even the political players have become, in a way that does not work in their favor, extras in yet another dispute that might seem to be a peripheral issue but is actually a major one: the fight between the publisher of the Yedioth Ahronoth group and the publisher of the freebie daily Israel Hayom.

The status that Prime Minister Benjamin Netanyahu posted to Facebook on Monday, expressing anger toward Arnon Mozes, his newspaper Yedioth Ahronoth and his website Ynet, was a clever campaign move. He dictated an agenda, pushed his opponent into a corner, and prompted a response — not one of the best, we must admit — from a senior journalist at Yedioth, who suggested that the prime minister be committed to a psychiatric hospital.

But more important, Netanyahu turned what had been written and said here fairly recently as a kind of commentary or assessment — that these elections had been born of the approval, in a preliminary reading, of the so-called Israel Hayom bill in the Knesset on November 12 — into writing on the wall that screamed out. Indeed, it is true: This election campaign is actually the “SheldoNoni War.”

The politicians know how to get along quite well with one another. Every single man and woman among them slits one another’s throats during the campaign, and the day after the elections they all sit down quietly together in a hotel suite, light up cigars, pour glasses of wine, and cut a deal for the next four years.

But there will never be peace between Adelson and Mozes, nor will there ever be unity between them. When Netanyahu sends his Knesset members to the media to lash out against Yedioth Ahronoth and to defend, with their own bodies, the newspaper that is his private mouthpiece and his family’s propaganda organ – he is stating openly, for all the world to know, that it was for this that he disbanded his government last December, when he dismissed Yair Lapid and Tzipi Livni with no reasonable cause.

When he accuses Mozes and Co. of trying to topple him from power in order to close Israel Hayom, a disturbing question arises on its own: Who is the boss here, and who is the subordinate? Who is running things, and who is being run? Who is giving the orders and who is carrying them out?

Who is the boss?  My guess it isn't Netanyahu.  It's his boss, Sheldon Adelson.  The same guy steering the Republican Party.

a testament to Adelson's power was Newt Gingrich's primary campaign in 2012, Mound.

It would appear that Adelson -- and Adelson alone -- kept Gingrich going.

True enough, Owen. But surely this is going too far. A big money creep from Vegas who can direct policy in both the US and Israel.

A holes like this are going to be outflanked by the millinianls. They are the most cynical generation ever.

The Boomers of which I am one are a major dissapointment. The MAN played us like a rented sound system.

The millinials will be better.