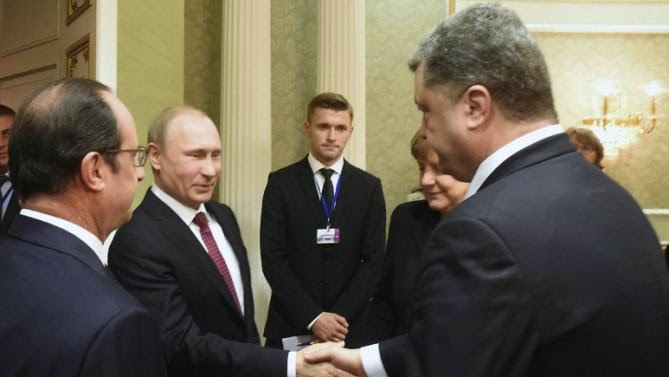 Angela Merkel and Francoise Hollande seem to have pulled it off - a peace deal to end the civil war in Ukraine.  What no one is even asking is if there's a chance it will hold.

The shooting stops at 5 p.m. ET Saturday.  Like all ceasefires the warring parties are free to go at it hammer and tong right up to the last minute (and they usually do in these situations).  Then a withdrawal protocol comes into effect for the removal of heavy weapons out of firing range (25-70 kms.) from a demarcation line.

No peacekeepers.  The Kiev government doesn't want them, supposedly because it fears Russia would use it as an excuse to flood the place with troops friendly to Moscow.  There are observers who suspect Kiev might have other reasons for not wanting prying eyes on its territory.

Kiev is supposed to amend its constitution to afford new rights and powers to the separatist-controlled regions of Donetsk and Lugansk where there'll also be new elections.  I wonder what issue the voters will be deciding?  That sounds like a slow-burning fuze.

Peace - in our time.  Where have I heard that before?
Posted by The Mound of Sound at 9:18 AM