Shhh - Not In Front of the TV, George. 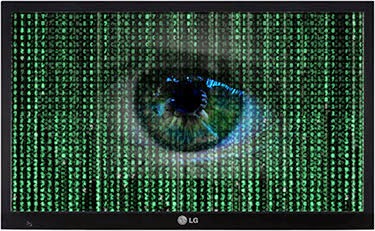 Be careful what you say in front of your smart TV.  According to Samsung, you never know who might be listening to your every word.

When the feature is active, such TV sets "listen" to what is said and may share what they hear with Samsung or third parties, it said.

Privacy campaigners said the technology smacked of the telescreens, in George Orwell's 1984, which spied on citizens.

Now there's a comforting thought.  You live under the rule of a guy like Steve Harper turning your country into a surveillance/police state and you've got a TV that can rat you out.  Hmm, what possibly could go wrong?

This is the latest in an ongoing saga of home electronics from gaming consoles to smart TVs that can be mined for the user's personal information.  In 2013, manufacturer LG apologized for collecting customer's viewing habit data via its smart TV.  From your laptop to your gaming console to your freaking car, we're immersed in technology that could be used to track us and spy on us by someone with the know-how say like your government's electronic surveillance services.
Posted by The Mound of Sound at 7:58 AM

How often have you heard someone say that there is no privacy; get used to it? Many of us who grew up when privacy was valued simply do not understand the readiness of those who so easily bare themselves. Most people understand that it is unwise to put their name, phone number and photograph on the wall of a public washroom with an invitation to get in touch but will do the same on social media with no thought about it. They use the tools but don't understand them and certainly don't bother to read the legal disclaimer when registering at Facebook or Twitter. It boggles the mind.

There's no longer a public consciousness concerning the significance of privacy and how it is the one right that is the foundation for virtually all others.