Forbes columnist, Rick Unger, countered, calling Netanyahu "the Republican senator from Israel" before laying into the man who orchestrated this fiasco still in the making, Republican House leader, John Boehner.

Boehner’s hubris, in conjunction with Israeli Prime Minister Netanyahu’s desire to interfere with American policy while seeking to bolster his re-election campaign, may turn out to be the very political screw-up that will allow the joint ticket forged by the Labor-Hatnuah political parties to bring an end to Netanyahu’s long reign atop the Israeli government.

According to a Channel 10 poll out this past Thursday in Israel, the joint ticket offered by the Labor-Hatnuah coalition currently stands to grab 24 seats in the Israeli Knesset in the coming election—up one seat from the previous poll—while Netanyahu’s Likud Party is holding steady with just 20 seats.

The poll also projects that the party leaders atop the Labor-Hatnuah ticket, Issac Herzog and Tzipi Livni, have an increasingly good chance of forming the next Israeli government by assembling a coalition of between 61 and 68 seats in support of their government.

It turns out that there are [sic]no shortage of Israeli voters who don’t care for the idea of their Prime Minister jumping into the middle of America’s internal disagreements over foreign policy and further understand that, at the end of the day, Israel remains deeply dependent upon the United States for critical assistance in the never-ending battle to preserve and protect their nation.


...It turns out, the plan to have the Israeli Prime Minister speak to Congress, without first discussing with the White House, was the brainchild of Israeli Ambassador to the U.S. Ron Dermer who has, for weeks now, been endorsing the re-election of Bibi Netanyahu on American television programs despite explicit Israeli Civil Service regulations prohibiting him from doing so.


In addition to Dermer’s apparent violation of Israeli law, he also revealed his penchant for duplicitous behavior by meeting with US Secretary of State John Kerry just one daybefore Speaker Boehner announced his invitation to Prime Minister Netanyahu, yet never once mentioned to Kerry what was about to happen.

Making it all the more offensive, the White House has explicitly gone out of its way, since the announcement of the Israeli elections, to avoid saying or doing anything that could be interpreted as support for the Herzog/Livni ticket.

In reviewing Netanyahu’s political ploy, and his ambassador’s duplicitous behavior, it seems fair to ask whether this is really how friends treat friends?

While you may entirely agree with Boehner’s decision to invite Netanyahu to address the Congress, can you possibly not be disturbed that the Israeli ambassador to our country went out of his way to not tell our Secretary of State of his plan to interfere with our foreign policy and seek to embarrass our president in the process?

Israeli voters know these details and, by many accounts, are not all that happy with the way Netanyahu is inserting himself into the politics of the United States. What’s more, Israelis understand that, should Netanyahu win re-election, they are now looking at two years—if not more should a Democrat take the White House in 2016—of a very cold relationship with the White House at a time when this is likely not in the best interest of Israel.

Of course, just as Netanyahu has already pushed the date of his speech—originally scheduled for February 11—to a date in March just two weeks before the election, my prediction is that Netanyahu will realize his mistake (or take note of the polls) and seek to push the speech well past election day.

By then, it may be too late as this latest insult to the American President may prove to be one step too far for the man many Israelis have dubbed “the Republican Senator from the great State of Israel.”

...what neither the Speaker, nor those who cannot manage to think beyond their distaste for this president, understand is the truly unprecedented step Boehner has taken by joining with the leader of a foreign nation against his own president.

Presidents come and go. However, respect for the office of the presidency, particularly on the part of the man who is second in the line of succession to the presidency, should not.

Through his actions, Boehner may have scored some points for his party and for his preferred policy option vis-à-vis the Iranian nuclear negotiations. But in the process, the Speaker of the American House of Representatives has succeeded in embarrassing the Office of the President.

Considering that Speaker Boehner has failed to accomplish anything of note during his Speakership, I can only wonder how it must feel to have his legacy be his effort to disgrace the American President in the effort to bolster the political chances of a foreign leader.

I can’t imagine it would feel very good, unless Boehner has now becomes so consumed by party politics that he no longer can be bothered to consider what is best for his country in the long run. 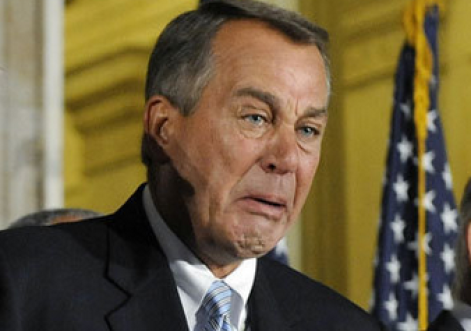 It is hard to fathom the naked hostility that Republicans have for Obama. One assumes it is partly because he is a Democrat and partly because of the colour of his skin.