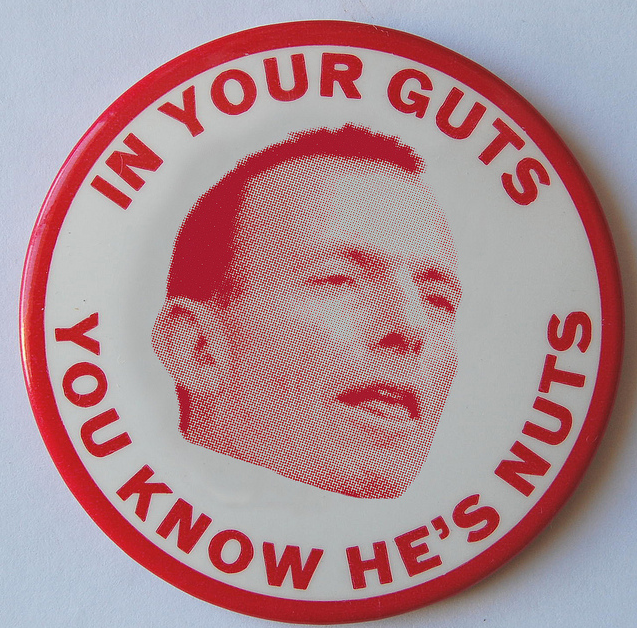 Australia's caricature of a prime minister, Tony Abbott, has wasted no time since narrowly defeating his backbench to hold onto his job, in confirming what the Australian public have long concluded - he's a nutjob, a true loose cannon.

This time it was submarines that gave Abbott another meltdown.  Literally since Abbott was elected there's been a row over the purchase of new subs for the Royal Australian Navy.   The Japanese are in the running (although it would require Tokyo to amend its constitution).  So, too, is a local firm.

There are lots of outfits building good u-boats these days - German, Swedish, French, Russian and Japanese.  The opposition Labor Party got on Tony's already prickly nerves by demanding the government put the submarine order to public tender.  From The Guardian's Australian political editor, Lenore Taylor:

On day two, good government seems to have slipped further from our grasp.

The prime minister claimed, out loud, that Labor wanted an open tender process for the $20bn contract to build Australia’s next generation of submarines so that Russia and North Korea might bid.

In fact he suggested Labor might want a bid from Kim Jong-il, who is, of course, dead – but we presume that was a mistake.

But there was no mistaking his intentions in making silly claims about Vladimir Putin and Kim Jong-someone as a little firecracker to distract attention from the fact that he either a) changed the way the submarine tender would be handled to win the vote of a South Australian backbencher in Monday’s leadership ballot, or b) misled the South Australian backbencher to think he had done so.

All in all not a good day for a prime minister whose people, or a good segment of them, believe he's off his nut.  Poor Tony.  If he keeps going on this way he's heading for a nervous breakdown.  Cue the next 'spill vote.'
Posted by The Mound of Sound at 10:41 AM

Clearly, he's a few sandwiches short of a picnic, Mound.

It works. People do not expect any more that leaders be rational. Its Pepsi and Coke, which sugar formula do you want.