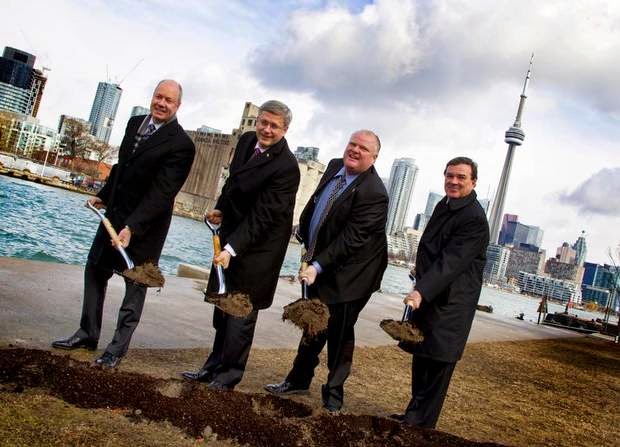 Now there is some speculation that, due to the abrupt resignation of Baird, coupled with Adams’ defection, Harper himself might increasingly find his own leadership questioned by normally loyal party members. Even one of the Conservatives’ former MPs, Albertan Myron Thompson, expressed his concern over the prime minister’s lack of commitment to the “values we had back in 1993.”

Adding to the uncertainty swirling around the issue of Harper’s future prospects, there are rumours that this month, Harper might indicate his intention to step down as leader and supposedly is considering calling a leadership vote by early spring to prepare for the coming election.

While such a rumour might simply be intended to rally the troops around the prime minister at a difficult time or might merely be the product of wishful thinking, the period ahead could be just as unpredictable as recent weeks with totally unforeseeable implications for all parties.

Hard to tell if there's anything to Stirling's speculation.  I spoke with my best Ottawa Tory pal the other night.  He's been waiting to tell me something but he said he can't yet.

One thing I have been told is that evidence that will be adduced in the Duffy trial will leave no doubt that Harper, quite deliberately and repeatedly, lied in the House about his involvement in the Wright-Duffy affair.  Seemingly, for Stephen Harper, the Duffy trial will be "brutal."
Posted by The Mound of Sound at 10:12 AM

Try it now. Thanks

From the link: "Still others believe that if Canadian forces suddenly suffer serious casualties in Iraq or Syria, voters might rally around the Harper government during such a perilous time for Canada, especially if Harper were to call an early election to receive a mandate for the fighting in the Middle East, thus also avoiding potentially dangerous fallout arising from the forthcoming trial of Conservative Senator Mike Duffy."

I still believe that Harper is hoping for a Canadian soldier to be captured by ISIS and show up on Youtube. Yes, I do think that Harper is that diabolical.

Potato Pete is appointing a bunch of cronies to the bench. People getting ready to leave do things like that.

Watch whether Steve appoints Jenni Byrne and Ray Novak to any patronage posts. That will be a dead giveaway that Sir Stephen, aka Closet Warrior, is bravely heading for the hills. Or the bird sanctuary in Israel before his BFF, Bibi, is booted out of office and the new guy in charge there changes the lock.

This is off topic Mound but I would like to know how you would respond if asked how you felt about Bill C-51? My response was...I think it is very bad for democracy in our county. I was told immediately....you are a very negative person. Anyong

This is certainly a time to be vigilant for telltales. I've heard that one or two heavyweights have quietly made their way into Harper's election war room but his PMO staffing remains stagnant.

I still find it hard to believe that anything will get Harper out of office except force. My prediction is that there will be a sham assassination attempt or something like that to bolster Harper's popularity at the eleventh hour. They will try ANYTHING to get reelected.

I'll tell you what my worst nightmare is, Mound. The Duffy trial, as you suggest, will prove beyond a shadow of a doubt that Harper lied to all of us, and the response will a collective shrug. I hope I am wrong, but it may be that the Canadian people have become so inured to bad leadership that they expect almost nothing from politicians anymore. If I'm right, we are lost.

.. realistically, the only door out of the Harper Closet is medical.. 'obviously, the advice of my doctors is paramount.. and the fact of the matter is obvious as I clearly reflected on the .. blah blah woof woof .. whether this obviously delays any election this year depends on the grave situation of the great evil we all face.. more blah blah'

I think Kirby is right.. hell I think everybody is right. Its all of the above. And with Kenney ascending to Defense prior to some bizarre face saving closet back door Harper Houdini move.. a benign malady treatable only in Geneva or London or Kuwait..

This so called government gets more outlandish, strident and secretive.. obstructive, belligerent by the day. They thrive on distraction, delay or deceit. And look at all those well trained spokeswanks placed in PR firms now MacDougall, Jason McDonald.

If it can be proven Harper lied to Canadians and MP's in Parliament, he is toast.. we know he kept changing his story re who else knew about Nigel/Duffy, its recorded in Hansard.. but if its accepted in a criminal trial that he knew?

He has access to thousands of lawyers.. and so would his successor... Mulroney took bags of money.. consequence?

Most news media in Canada aren't likely to write this or air this as a particularly significant development. Or if they do they'll shift responsibility for it onto Wright or Duffy or whoever else in the vicinity is already soiled.

Plus the judge is liable to be one of McKay's pets.

Whatever happens you can be sure of only one thing.

Canada will be the worse for it.

@ Lorne - yes that's a definite possibility. Harper has worked the Teflon magic so many times that it's hard to imagine that he might not get away with this thanks to public indifference.

@ Sal - Remember, the Mulroney-Schreiber business only surfaced well after BM had been run out of Ottawa. Even then Mulroney was able to deny everything for quite a while until the 5th Estate nailed it all down.

@ Dana - I think it'll be an Ontario judge chosen at the instance of the province, not the feds. The feds appoint directly to the Federal Court and SCC.