The Running of the Hounds. Westminster KC 2015 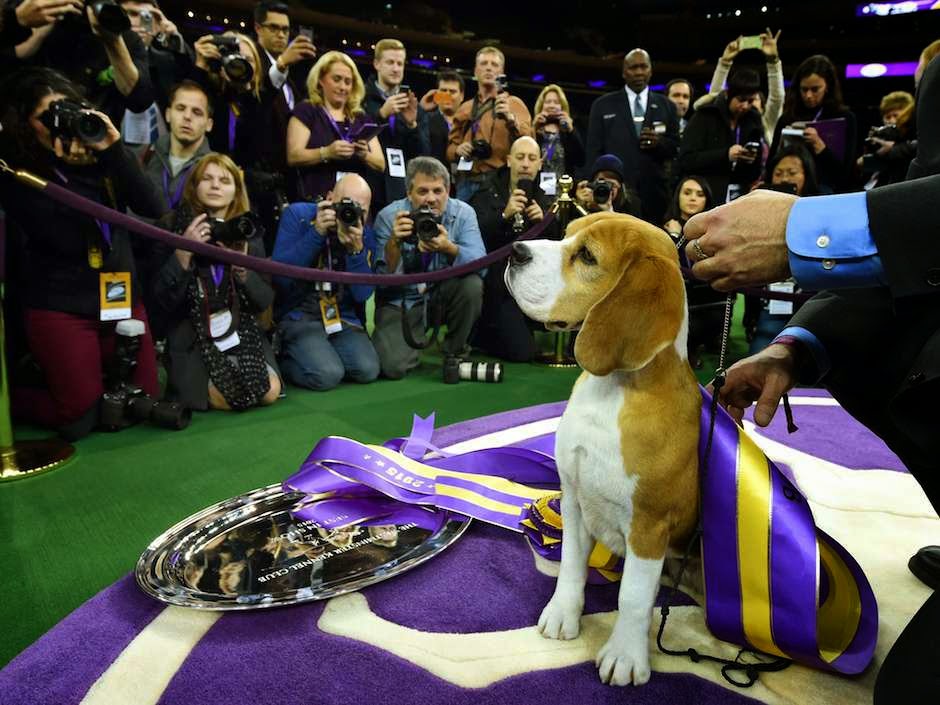 I'm a dog fancier.  I love dogs, most types anyway.  Not so much the fru-fru dogs, those little furballs that some people tote around but 'real' dogs - terriers, setters, retrievers and, most of all, hound dogs.  I love the hounds.

For the past forty years I've been a beagle guy.  I've had a few.  All of them have been great - hounds.  I like to think of the beagle as the Steve McQueen of the canine world.  Never comfortable with authority, an animal that takes the world strictly on its own terms.  When a beagle receives a command from its owner it goes through a two-stage process.  First it receives the command.  Then it asks itself, "alright but what's in it for me?"

Most people know a beagle to see one but few understand what makes these hounds so unique.  They've been around for many centuries.  Some say they go back around 2,500 years.

There are those who say that a beagle cannot be trained.  That is untrue. Thousands of years of careful breeding has produced a hound that is actually self-training.  They train themselves in accordance with their own needs and values and, when their interests coincide with yours, you get to claim the credit for the result.  Those who sow doubt as to the beagle's trainability are simply incapable of recognizing perfection.

We had a "beagle moment" yesterday when a BC-bred hound, "Miss P" took Best in Show at the prestigious Westminster Kennel Club dog show.  Our British Columbia hound is the grand-niece of Uno, who, in 2008, became the first beagle ever to win the top honour at the Westminster dog show.

Now, don't get me wrong.  Miss P is a splendid looking hound and a deserving grand champion.  That said she really doesn't rise to the standard of my current hound, Buddy.  She's close, very close but she just doesn't have it all.  I would never put Buddy in the show ring lest it ruin the hopes and aspirations of all other breeders in a giant collapse of their collective morale.

Last night was Miss P's last competition.  She's 4-years old and she has a line to continue.

Beagles, I'm sure, are fine, Mound, but the truly noble canine is the Landseer Newfoundland. We had the privilege of owning one that was a rescue dog. A more loyal, intuitive and intelligent companion I have never had (except for my wife, of course ;))

Lorne, I fear you've been staying outdoors too long in your Eastern deep freeze. The cold could be clouding your judgment. Fret not, it could happen to anyone. Sigh.

Maybe not fru-fru but rather a cartoon dog.

Congratulations to Miss P and her people. BTW her full name is Tashtin's Lookin For Trouble.

Cartoon dog? Coming from a guy with one of the ultimate fru-fru dogs of all time, the King Charles Cavalier spaniel, calling the noble beagle a cartoon dog is blasphemy!!!

What a great post. I love dogs too. We always had animals and particularly a dog in our house when I was growing up. Those were the days of wall to wall kids playing on the street and there was always one or two neighborhood dogs playing along with the kids. My favorite dog is a collie, but for the most part I love them all.

Not a poodle nor a Bichon but rather the smallest spaniel and trainable to retrieve small fowl.

Besides one of our Cavs is too big for the breed standard...actually about the same size as a 15" beagle. And only 14 months old.

When I saw Miss P for the first time a couple of nights ago and the commentator mentioned that she was a niece of Uno I figured she had a good shot at BiS. They're nothing if not incestuous at WKC.

The real dog show is Crufts for my money. Not many topiary dogs win that one.

I excel at blasphemy 'tis true.


I did once have a Basset.

Just remember, Pamela. Stephen Harper's pet of choice is a - cat. That's all you ever need to know.

Love your piece Mound. Having lived with Newfoundland dogs and not Labradors until I left Nfld, I have to say, there isn´t a more loyal, intelligent and command focused caine. Anyong

Hey, hey! What are you saying about cat people there?! I disavow any affiliation with Harper based on his choice of pets, thank you very much!

I am absolutely indiscriminate in my fondness for all dogs, including mutts, but I did think Miss P. was a very sweet looking dog, and if Buddy is handsomer yet he must be breathtaking.

I love me a beagle, terrier, boxer, spaniel, newfoundlander, retreiver, lab, german shepherd, even the silly toy poodle... I haven't met a dog I don't like.

But, but, but... don't you dare dis the cat. My Fearless and Weasel are the best pets ever - one is super smart (knows words in at least 3 languages), loves to dance and is friends to every person he meets (unless they're in uniform); the other is a dandy (doesn't mind wearing ribbons), gorgeous despite his Karl Malden nose and jumps amazing heights.

Karen, Beijing York and the rest of the Litterbox Brigade - don't tell me there's some equivalence between canine and feline. There isn't. Easy way to tell - one would defend you and one wouldn't.

That photo of Harper in a blue cardigan holding that cat did not endear me to cats although I hold the cat blameless. I would just like to believe that a dog would instantly see through that psychopathic personality. Dogs do that.,

I love mixed mutts, they are the absolute ultimate dog. The live longer, have more workability, versatility and lovability.
I have so many of my neighbours that go and spend thousands on masterful breeds of dogs, and they all come up and try to perform against my mutt and its funny to watch them all be outdone. My neighbours looked at my mutt with disdain but after a year of owning her, she became the most talked about dog on my tiny island. Foxy the mutt rescues cats, yep you heard me, she finds missing cats, lol and she manages to do it without chasing them, lol.
I bought her another dog, he had too much pedigree in him, oh boy, what a larf, I spent 3 yrs trainingmy shep mix, lol he finally has made me proud, but holy hell, thats my last and final pedigree( he only has 50%) but wow what a difference.
me I love me the medium sized brown mutts.

the epitome of dog, the one that makes friends with other species and pretends to be afraid of pet bunnies, lol she also cavorts withe deer.
https://www.youtube.com/watch?v=LG1uhC6Pfvs

I am always worried about the kittens you see him with. Do we ever see the kitten again? Do we see the kitten progress to adulthood? I think the kitten is a prop to make him look human. Im afraid he eats them.