With just three weeks to go, Israel's national election has turned into a real nail-biter.  The governing Likud party of Benjamin Netanyahu is in a dead heat tie with the rival Zionist Union party, each of which stands to collect 24-seats according to the latest polls.  Of course it's not all that simple.  With 11-parties expected to meet the 4-seat party threshhold, forming a government coalition really is a matter of herding cats.

Being tied for first isn't an enviable position for Netanyahu's Likud, not when the prime minister is about to stage his potentially explosive appearance before a far-less-than-joint session of the US Congress.  Many Democrats are expected to boycott the speech which is seen as an effort by Netanyahu to undermine the White House.  That's worrisome to voters in Israel who hate to see anything that harms Israel's relationship with Washington.  Both Barack Obama and Joe Biden are giving Bibi the cold shoulder.  He won't be received at the White House and Biden won't attend the speech although he's the president of the Senate.

Some of Israel's strongest Democratic supporters tried to reach out to Netanyahu, offering to arrange a separate meeting but Netanyahu returned the snub and rejected their offer.  That'll go over - not well - either on Capitol Hill or in Israel.

The White House is fighting back:


The Obama administration has engineered a series of highly visible snubs of Netanyahu – from refusing a White House invitation and levelling accusations that the Israeli government is not trustworthy to a humiliating leak about new limitations on intelligence sharing – just weeks before the Israeli leader faces a tight general election.
Top administration officials, including Vice-President Joe Biden and the US secretary of state, John Kerry, have made a point of meeting Israeli opposition leaders who have seized on the dispute to characterise Netanyahu as jeopardising relations with Israel’s most important ally.
Aaron David Miller, who served six US secretaries of state as an adviser on Arab-Israeli negotiations, said the confrontation marks a further deterioration in an already dysfunctional relationship between Obama and Netanyahu. But Miller, who is now a vice-president at the Woodrow Wilson Center in Washington, said the Israeli leader’s divisive handling has handed the administration an opening “to try to demonstrate how much the US-Israeli relationship is dysfunctional at the top because of Netanyahu” and an opportunity to press for “regime change”.
...Last week, the White House made an unusually direct attack on the Israeli government, accusing it of dishonesty in selectively leaking information about the Iran nuclear talks to the Israeli press in an attempt to discredit the negotiations.
“We see that there is a continued practice of cherry-picking specific pieces of information and using them out of context to distort the negotiating position of the United States,” said the White House spokesman, Josh Earnest. “There’s no question that some of the things that the Israelis have said in characterising our negotiating position have not been accurate.”
That led the US not only to take the unusual step of limiting the intelligence it shares with Israel about the Iran talks but to embarrass Netanyahu by leaking the move.
Bibi's credibility took another body blow with the leak of documents showing that Netanyahu has been dishonest about the state of Iran's nuclear programme.  The focus has been on his appearance before the UN General Assembly when he claimed that Iran was on the cusp of production of nuclear weapons.  He used a red marker pen to show that Iran was all but ready to go nuke. 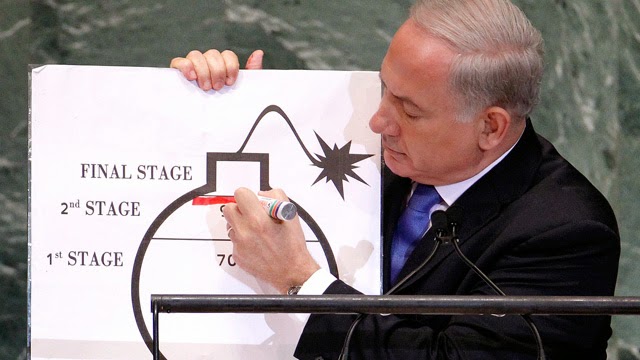 Bibi's problem is that even Israel's own and highly-respected intelligence service, Mossad, has a much different opinion.  Mossad's assessment is that Iran is years away from producing a bomb.  In other words, Netanyahu has been freely lying to anyone and everyone about Iran and the imagined threat it poses to Israel.
Well, now that he's pissed off Obama and pretty much every other world leader, that leaves Netanyahu with just one unquestioningly loyal friend, Mr. "Bring on Armageddon" himself, Stephen Harper.

And, of course, for Harper and Co. Bibi can do no wrong.