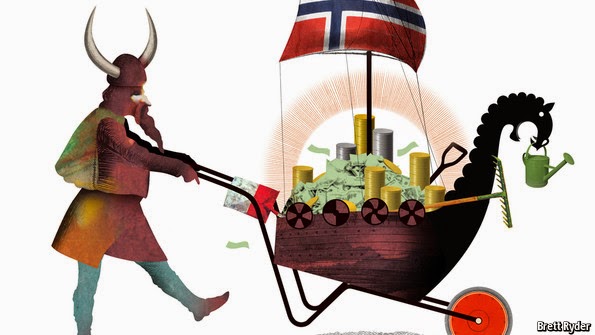 It's the largest sovereign wealth fund on the planet; Norway's pride and Canada's shame; and it's divesting, getting out of coal, bitumen, concrete and gold mining.

If Steve Harper and Jim Prentice thought Keystone XL was a headache, this could give them fits.

Norway’s Government Pension Fund Global (GPFG), worth $850bn (£556bn) and founded on the nation’s oil and gas wealth, revealed a total of 114 companies had been dumped on environmental and climate grounds in its first report on responsible investing, released on Thursday. The companies divested also include tar sands producers, cement makers and gold miners.

A series of analyses have shown that only a quarter of known and exploitable fossil fuels can be burned if temperatures are to be kept below 2C, the internationally agreed danger limit. Bank of England governor Mark Carney, World Bank president Jim Yong Kim and others have warned investors that action on climate change would leave many current fossil fuel assets worthless.

“Our risk-based approach means that we exit sectors and areas where we see elevated levels of risk to our investments in the long term,” said Marthe Skaar, spokeswoman for GPFG, which has $40bn invested in fossil fuel companies. “Companies with particularly high greenhouse gas emissions may be exposed to risk from regulatory or other changes leading to a fall in demand.”