The Way We Wage War, We Never See This Coming and Probably Never Will. 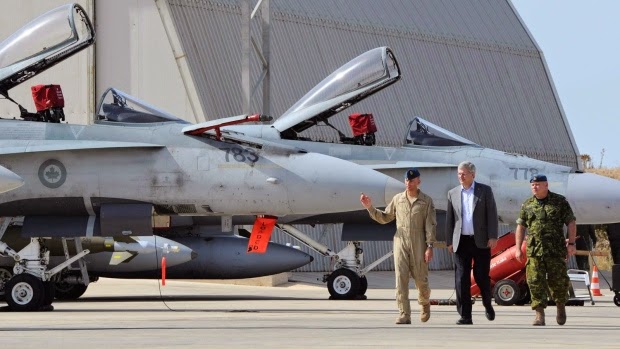 We absolutely luuuuv our air wars, whether it's over Serbia or Libya or Iraq. Load up those underwing hard points and let's go drop some bombs.  Yeah, that's the ticket.

We like air war because it's cheap and dirty.  It eliminates the need for benchmarks to distinguish victory from defeat.  It's like going on a big family picnic.  You send a six-pack of CF-18s and everyone else chips in with a handful of whatever they have that's still airworthy and the party's on.

Take Kosovo, remember that place?  In 2008 we bombed Milosevic's Serbia for weeks until old Slobodan agreed to let 'our' people go.  We liberated Kosovo for its Albanian Muslim population.  It must be blissful today, eh?  Not so much. Even the Kosovars don't like the place and they're beating feet for Europe, Germany in particular.  Why would they not when its economy is largely based on cigarette and cement smuggling and organized crime?

Then we had Libya in 2011, a dandy air war against the holdout forces of Muammar Gaddafi.  Some, such as this blogger, called for an Egyptian invasion to quickly topple Gaddafi and restore order to make way for a new, civilian government.  The Egyptians next door had masses of late-build American F-16 fighters and M-1A1 Abrams tanks and could have taken Tripoli in a matter of days.

Why did I advocate an Egyptian campaign against Gaddafi in February, 2011? Because al Qaeda announced - quite openly announced - that they intended to get into the Libyan civil war in order to establish a toe hold to spread throughout North Africa.  They were candid about having missed their opportunity to get established in Egypt during the uprising against Mubarak and were determined not to repeat that blunder in Libya.

Egypt, only Egypt, had the means to get to Tripoli fast and keep al Qaeda out.  It would have been a matter of a few days and it would have saved thousands of lives and years of utter chaos.

Gwynne Dyer also came out in favour of Egyptian intervention on March 15:

...What is actually needed is active military intervention on the ground and in the air by disciplined, well-trained Arab forces, sent by a revolutionary Arab government that is in sympathy with the Libyan rebels. So where is the Egyptian army when the Libyans need it?

Egypt has an open border with the rebel-controlled east of Libya, and just one brigade of the Egyptian army would be enough to stop Gaddafy’s ground forces in their tracks. The Egyptian air force could easily shoot down any of Gaddafy’s aircraft that dared to take off, especially if it had early warning from European or American AWACS aircraft

Then on March 23, Parliament unanimously endorsed Canadian participation in maintaining a "no fly zone" over Libya which led me to note:

Approval wasn't automatic. Questions were asked. According to the G&M, the opposition asked when the mission would end, what would constitute success and what the whole thing would cost. Apparently satisfied when the government couldn't answer even one of those questions, they all stood up on their hind legs, let out a manly "Hurrah" and voted to endorse the mission that, plainly, no one understands.

And so we wound up going through a NATO-centric bombing campaign against Gaddafi forces that dragged on for 160-days.  Gaddafi was captured, summarily executed and Harper staged a victory fly-past over Parliament Hill even as al Qaeda was consolidating its own victory back in Libya.

Flash forward from 2011 to 2015 and where are we?  Libya hovers on the cusp of becoming a failed state.  It is incapable of forming a democratic government as no one is really in effective control.  ISIS has followed al Qaeda in setting up shop in Libya.

Today's National Post (via Britain's Telegraph) reports that ISIS is planning to use its presence in Libya as a springboard for attacking into Europe.

The group has already established Libyan-based cells, who on Sunday released a video showing a mass beheading of 21 Egyptian Christian guest workers. The video, which prompted Egypt to launch retaliatory bombing raids on ISIS positions in Libya, included footage of a khaki-clad militant pointing a bloodstained finger northward, declaring, “We will conquer Rome, by Allah’s permission.”

The ISIS propagandist [Abu al-Libim] describes Libya as having “immense potential” for the group. He points out with relish it is awash with weapons from the country’s civil war, when large quantities of Gadhafi’s arsenals were appropriated by rebels. Some of those weapons came from Britain, which supplied the Gaddafi regime with machine guns, sniper rifles and ammunition during his final years in power, when he was seen as an ally against Islamist terrorism.

Libim also points out Libya is less than 490 kilometres from parts of the nearest European mainland.

“It has a long coast and looks upon the southern Crusader states, which can be reached with ease by even a rudimentary boat,” he writes

“The number of trips known as ’illegal immigration’ from this coast, which are huge in number … if this was even partially exploited and developed strategically, pandemonium could be wrought in the southern European states and it is even possible that there could be a closure of shipping lines and targeting of Crusader ships and tankers.”

Harper will need a lot more than a six-pack of aging CF-18s to deal with this bunch.  Wait, I forgot, we've already had our triumphalist flypast to commemorate our amazing victory over Libya.  That file is closed.

Fortunately our current air war over Iraq will be a rousing success where our previous air wars flopped.  Or, maybe not.  Oh well it keeps a lot of people, especially the Liberal Loudmouth (TM), happy and, at a paltry million dollars a day, it's peanuts.

You don't win a war without a winning strategy and the necessary commitment and perseverence.  You need a clearly understood objective and a plan of what you need to achieve it.  If you choose to skip on the strategy and duck the planning business, you're setting out to avoid failure which pretty much ensures you'll fail.  We're already well into our second decade of whack-a-mole warfare and it has failed us at every turn.  Why stop now?

The great powers are still fighting WWII. They can't get past thinking that they can bomb an enemy into submission. They must be encouraged in this idiocy by the profiteers who make bombs.

ISIS is the ideal enemy. It frightens people at home and abroad and will keep our bomb factories busy for generations.

"Root causes"?(in the video clip) Where have I heard that ridiculed before?

Have we gone too far down the rabbit hole? Geez, for the sake of my children, and grandchildren, I hope not.

Toby, we don't want to know how to defeat ISIS because we wouldn't accept the answer. We're not ready to fight to win. Post 9/11 we haven't waged a single war we were committed to win.

@ UU4407 - where have you heard that ridiculed before? By Warren Kinsella, endlessly, for starters. He uses it as a cudgel to beat young Trudeau over the head. It never dawns on Kinsella that, when it comes to matters of warfare, he couldn't find his ass with both hands.

The creation of radical Muslim movements/opponents was PLANNED* and Iraq and Libya were destroyed to accomplish such goal.

I find myself wondering if it may also often be harder to win wars that you shouldn't be fighting in the first place.
Take Libya. Libya wasn't a failed state, it only had rebels because the CIA sponsored them, and it wasn't attacking anyone or sponsoring terrorism or anything. The boss was a dictator . . . just like almost everyone else in the region . . . but as far as I can tell his rule was seen by the Libyans as basically legitimate.
So we took away the central government in favour of actors who had no perceived legitimacy. So yeah, nobody listened to anything they said and the whole thing fell apart into a tangle of local interests who felt that one bunch of guys with guns had no more right to tell them what to do than any other bunch of guys with guns and best they get some guns themselves so they could do some of their own telling.

Doing the war differently would perhaps have worked not-as-bad, but the core problem remains: Unjustified attacks which amputate the legitimate government in favour of people who have no legitimacy and who don't have the local public's interests in mind, will lead to unstable failing states.

I have begun to think this may be a feature rather than a bug, for the Americans. It may be all part of retaining hegemony for the strong US dollar; when everything's going to shit, there is a "flight to quality" that causes people all over the world to buy US$. So, especially in times when the American economy and ability to pay debts may start to become suspect, an effective way to prop up the dollar and its international reserve currency status is . . . to screw up the world! Destabilize countries, create failed states, sabotage economies, it all makes the US$ look like a safe haven. And that's even aside from all the domestic benefits for the military/industrial/police-state complex.