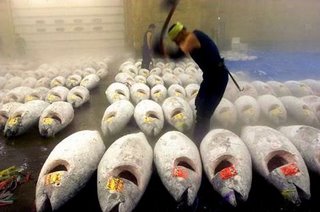 The Japanese love tuna. In fact they may love it straight into extinction.

A meeting begins today in Kobe, Japan of the world's five biggest tuna fisheries and the opening message is that the supply of tuna is now on the brink of commercial extinction.

The Japanese love Atlantic bluefin tuna, especially for sushi, and the nation's voracious appetite for the fish is now being made worse by other nations, particularly China, where demand has skyrocketed.

The message at the tuna fisheries management conference is that there is an urgent need to restrict quotas if the stocks are going to survive. Even if quotas are imposed, enforcement remains a huge problem. There's a lot of money to be made in bluefin tuna, enough that there is a large, illegal fishery. Bluefins are giants of the sea that can grow to 1,100 pounds. The Japanese admit to overfishing but blame it on poor communication with their fishing fleet, not poaching. Yeah, sure.
Posted by The Mound of Sound at 8:07 AM