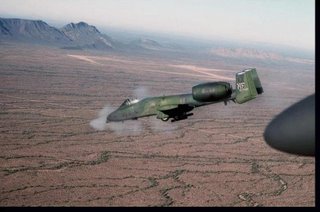 Hard as this may be to believe, it may be true. From The Guardian:

"An English coroner's court has received evidence that "rogue" American pilots attacked a British convoy in southern Iraq in 2003.

"Staff Corporal Ashley Bell said there had been a flash as the first attack started. He had immediately radioed forward air control with the "Stop, stop, stop" instruction but had been told the planes were being flown by "rogue US pilots".

"'[The controller] could not contact the US pilots because they had switched frequencies and were talking to each other.'

"Soldiers in the five-vehicle convoy released smoke canisters to identify them to friendly pilots. The smoke was visible as one of the planes returned at low level and attacked a second time.

"Despite requests by the coroner and the British government, the pilots of the US planes that shot Corporal Hull have never been publicly named and will not attend the inquest."
Posted by The Mound of Sound at 6:13 PM