Is This Some Sort of Weird Reality Show? 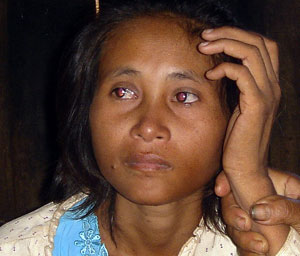 Gee, Her Eyes Are Red
Jungle Girl, the Ultimate Survivor.

When the story broke last week, her "father" described her as "bare-bones skinny" and positively feral, scurrying around like a money, plucking grains of rice off the floor and glaring at perople with her "red like tigers' eyes."

When Jungle Girl, Rochom P'ngieng, emerged in front of the cameras yesterday she looked about as emaciated and wild as a nanny.

The putative father, Sal Lou, is clamming up. He's already refused DNA testing to confirm his paternity of Rochom, if that is her name. Meanwhile the story is just getting better.

It's now reported that Jungle Girl was seen running around naked with Jungle Boy who was wearing a similar costume. Her fella, it seems, fled into the bush when Rochom was taken. No word on where Cheeta was while all this was going on.
Posted by The Mound of Sound at 7:13 AM