Smoking - It's All In Your Head 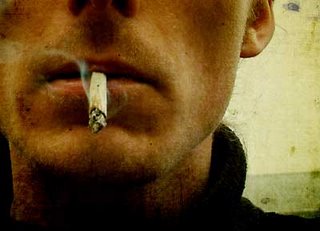 Wanna kick the habit? Brain damage just might do the trick.

The New York Times reports that researchers studying stroke victims have found that brain damage near the ear can can "instantly and permanently break a smoking habit."

The entire business is now linked to a part of the brain called the "insula."

“In a sense it’s not surprising that the insula is an important part of this circuit maintaining addiction because we realized some years ago that it was going to be a critical platform for emotions,” Dr. Damasio said in a telephone interview. “It is on this platform that we first anticipate pain and pleasure, not just smoking but eating chocolate, drinking a glass of wine, all of it."

"This explains why cravings are so physical and so hard to shake, he said: they have taken hold in the visceral reaches of the body well before they are even conscious.

“The question is, Can you learn to deactivate the insula?” said Dr. Volkow said. “Now, everybody’s going to be looking at the insula.”