Is Hillary What the World Needs Now? 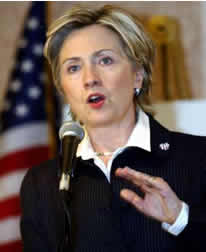 Hillary Clinton is on a roll and she's following the example of the Iron Lady herself. That's right, Clinton wants to emulate the image of Margaret Thatcher - strong, decisive, with a clear vision of world affairs.

Clinton may turn out to be the most conservative candidate in the next election - of either party.

In an interview with the Times of London, Hillary's campaign manager, Terry McAuliffe, said there are similarities:

"'Their policies are totally different but they are both perceived as very tough,' said McAuliffe. 'She’s strong on foreign policy. No matter what people say, you still have to check that box on national security. People have got to know you are going to keep them safe.'

Their policies are totally different? We won't know that until Clinton reads the polls and finds out which policies will best serve her ambitions. As for tough, that she is - no question.

"'She has the name recognition, the money, the glitz that goes with all this — she’s got it all,' said Terry McAuliffe, her campaign chairman, in an interview with The Sunday Times. 'She has got a great case to make about why she should be president of the United States.'

Name recognition, money and glitz - yeah, that pretty much covers all the bases to qualify for president.

The problem is that Americans, while they may be willing to elect a Democrat, even a woman, to the White House, still won't accept a "liberal." That means the eventual winner will have to stand as a conservative.

David Gergen presented a telling example of this when he appeared on Charlie Rose's show a couple of months back. Gergen, who is now at the Kennedy School at Harvard, served four presidents, beginning with Richard Nixon. He noted that a Nixon, who took some initiatives to aid the poor and minorities, could not even hope to get elected today because he would be viewed as too liberal. Nixon, a liberal? Yes, that's how far to the right the political centre has shifted in the US.

Hillary may lead the push for universal medicare but that path has already been paved by Massacheusetts and California so she would have a much easier time of it than she encountered when her husband was president.

Still, Hillary will have to focus on "guy issues" lest she be seen as soft or a leftie. She will, in effect, be running against George W. Bush. On major questions such as global warming, the environment and the Third World, Clinton won't lead, she'll follow the polls and American self-interest.

Unfortunately the world doesn't have the time for a president who is focused on going back to refight the wars that George Bush screwed up. What's needed isn't a "better" but backward vision but a fresh, forward vision that clearly sees the issues that will need to be addressed in the coming generation. I don't think Hillary Clinton is up to that job, she's not what the world needs now.
Posted by The Mound of Sound at 10:12 AM