Hillary's In - How Nice 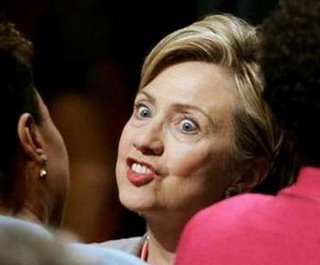 Hillary Clinton, to no one's surprise, has surprised everyone by announcing that she's going to run for president. And, of course, she's going to make Iraq the central theme of her campaign but, then again, who isn't?

Hilly, as I call her when we speak off the record, was as enthusiastic as a Rotarian in her support for the Iraq war, long past the point at which that was appropriate but enough of that now.

This promises to be a bruising campaign - if you happen to be an American infantryman. They're going to get kicked from one end of Baghdad to the other over the next two years and their fate and their mission is now in the calloused hands of political fortune as read by pollsters.

"Mrs. Clinton said that candidates in the 2008 race should be thoughtful and responsible when talking about war, rather than trying to score easy political points with red-meat rhetoric.

“'I am cursed with the responsibility gene.' she said. 'I am. I admit to that. You’ve got to be very careful in how you proceed with any combat situation in which American lives are at stake.'

"On Iraq, she has never repudiated her vote in 2002 authorizing military action. But last month she said that she “certainly wouldn’t have voted” to go to war if she had the same information in 2002 that she does now.

No red-meat rhetoric, for sure. Pork tenderloin sophistry with a mild, dijon/fennel sauce is the limit. As for Hilly's genetic affliction, maybe they can find a cure for that in stem cell research.

"Mrs. Clinton was sharply critical of Iraq’s prime minister, Nouri al-Maliki, saying she believed he had given her “lip service” during a meeting on Saturday about his government’s commitment to cooperating with the American mission there."

Lip service? Don't use language like that, Hilly, it reminds us of Bill.

By the way folks, Clinton isn't exactly Canada-friendly.
Posted by The Mound of Sound at 6:44 AM