It's All About Benchmarks 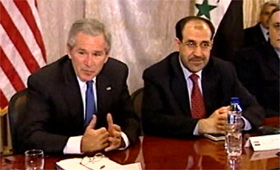 What are "benchmarks" anyway? In Washington parlance they're chores with timetables, sort of like telling your kids they'll get up at 8 and have their beds made by 8:15, that sort of thing. You put the deadlines on because you figure they'll dodge the chores without them. And, yes, the whole thing is sort of like speaking to recalcitrant children.

George Bush is taking a lot of heat for his thoroughly botched war and occupation of Iraq. He was able to lie his way in but he's getting nowhere trying to lie his way out. He needs action, accomplishments, something, anything that will let him claim "mission accomplished" without gradeschoolers laughing at him.

The Frat Boy has flown in the face of all the advice of the Iraq Study Group and his own generals and has defied the will of his congress and his people and opted for a "surge" to pacify Baghdad with the suggestion that this will lead to an end to sectarian violence (civil war) throughout the country. To make the American people believe he's serious this time, Shrub has announced that he's given Iraq's recalcitrant child leader, prime minister Maliki, a series of "benchmarks" to meet, or else something may or may not happen.

But what are these benchmarks? What is the accompanying timetable? Well, the Democrats control congress now and that lets them demand that the administration cough up some answers. They asked and the White House delivered.

Secretary of State Condi Rice sent a letter to Senator Carl Levin giving particulars of an "agreement" reached early last fall, long before Bush came up with the "surge" idea. It turns out most of the specified times for achieving these benchmarks has long come and gone. You can find the list here:

It turns out that the Maliki government has already missed most of the benchmark deadlines:

"Iraq has passed target dates to make laws establishing provincial elections, regulating distribution of the country's oil wealth and reversing measures that have excluded many Sunnis from jobs and government positions because of Baath party membership, according to the list Rice provided.

"The Iraq government had also agreed to approve a law governing political amnesty and the charged question of sectarian militias by Dec. 31 and to finish a review of the constitution, seen as unfair to minority Sunnis, by Wednesday.

"Although the Iraqi parliament and Cabinet have done intermittent work on some elements of the list, including the symbolic oil law, it appeared that none of the targets have been fully met. The list spans September 2006 through March 2007.

"Last week al-Maliki called on lawmakers to pass several items on the list, including the oil and de-Baathification laws."

The benchmark list has received an angry response from the senate:

"Levin, chairman of the Armed Services Committee, and McCain, the panel's ranking member, said Rice's letter lacked details and ignored a goal previously suggested by U.S. officials: that the Iraqis should be able to assume control of their provinces by November 2007.

"'What Secretary Rice's letter makes abundantly clear is that the administration does not intend to attach meaningful consequences for the Iraqis' continuing to fail to meet their commitments,' the senators wrote. "What has been said before is still true: 'America supplying more troops while Iraqi leaders simply supply more promises is not a recipe for success in Iraq.'"

The Democratic Party's control of congress has placed the Bush administration where it least wants to be, in a position of accountability. It's not a comfortable place for one of the most secretive and dishonest presidents in American history.
Posted by The Mound of Sound at 8:08 AM