The Worst Record in the World 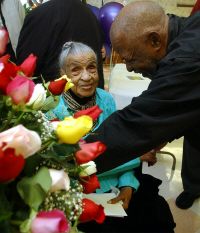 One thing about being acclaimed the "oldest person in the world" is knowing that you won't be for very long. There have been a lot of "oldest person," "oldest man," "oldest woman" lately as the titles keep changing hands in the only way these titles can change hands.

However 114-year old Emma Tillman scored a record that may have some real staying power. She's the shortest reigning world's oldest known living person. Emma, a child of former slaves and herself Katherine Hepburn's former nurse, held her title for only four days before she "passed on" the honour to 114-year-old Yone Minagawa of Fukuoka, Japan.

A Telegraph reporter who tried to reach Ms. Minagawa was told by a nurse that she'd already gone to sleep.
Posted by The Mound of Sound at 11:18 AM