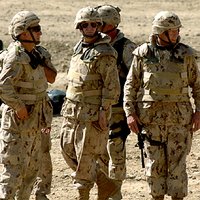 Whether it be Afghanistan or Iraq, one factor that's rarely talked about is our forces' very limited shelf life.

Let's face it - we are aliens in these places. We don't share their language, their culture, their religion, their ethnicity, their poverty and health problems, their vision and aspirations.

We're mainly white, we're relatively affluent and we have the biggest and best guns. That's bound to rankle after a while. It's the sort of thing that can inject an element of fervor into latent nationalistic sentiment.

When you're this different, you don't get to play around indefinitely. You really can outstay your welcome. People get tired of looking at you, tired of strangers telling them what to do, tired of the fighting, tired of the mistakes.

No, when you get stuck into these situations, time is a limited asset and you have none to squander. In these two countries we have been profligate in our waste of time.

"Attacks against occupation forces appear to stem more from a growing nationalism. 'This is not about vengeance,' a former Iraqi Army officer from Kut, 200 kilometers south of Baghdad, said in the capital. 'People have lost hope in the US-led occupation's promises, and they are thinking of saving the country from Iranian influence, which has been supported, or at least allowed, by the multinational forces.'

"While members of the Mehdi Army certainly carry out attacks against occupation forces in southern Iraq, other home-grown resistance seems to have taken root, fed also by earlier memories.

"'People here have always hated the US and British occupation of Iraq, and remembered their grandfathers who fought the British troops with the simplest weapons,' said Jassim al-Assadi, a school principal from Kut. Assadi was referring to the Shi'ite resistance that eventually played a key role in expelling British forces from Iraq during the 1920s and 1930s.

"Armed resistance against the occupation in the south was slow to begin with because religious clerics instructed their followers to give the occupation time to fulfill promises made by the US and British administrations, Assadi said. 'But now they do not believe any cleric's promises anymore. They have started fighting, and that is that.'"

The Afghans likewise have a rich and proud history of resisting and throwing out the infidels. If the locals do lose faith in us and their president, Hamid Karzai, they can be expected to swell the ranks of the insurgency.
Posted by The Mound of Sound at 11:27 AM

We could wait until they show up here in North America again and kill a few thousand more people. Why some people prefer that option is hard to fathom.