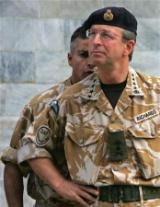 This sounds like a fantasy hatched in the Oval Office. The commanding NATO general in Afghanistan, British General David Richards, figures the Taliban can be defeated in just one more year. That's right folks, we can destroy the Taliban if we get more money and more troops for a surge of our own.

Richards said, "I am concerned that Nato nations will assume the same level of risk in 2007, believing they can get away with it. They might, but it's a dangerous assumption to believe the same ingredients will exist this year as they did last. And anyway a stabilised situation is not a good enough aim. We should and can win in Afghanistan but we need to put more military effort into the country ... We must apply ourselves more energetically for one more year in order to win."

He also listed a few other pre-conditions to victory:

-The west must stop trying to impose western solutions on an Islamic society at a very early stage of development.

- Afghanistan's president, Hamid Karzai, must step up the country's efforts to root out corruption.

- Relations between Afghanistan and Pakistan governments had to improve. "Currently they are passing in the night and the climate is not good," he said.

- Civilian agencies, including Britain's international development department, had to speed up reconstruction efforts.

It's the old one about "the Devil being in the details." So, if we put a real thumping on the Taliban for another year and speed up reconstruction and Afghanistan and Pakistan get into an anti-Taliban alliance and Karzai purges his government and security services of rampang corruption and we give up our silly notions of bringing Western democracy to Afghanistan - we could win.

It's a pretty tall order that General Richards prescribes and there seem to be some major hurdles facing his collateral conditions. But yes, if we can batter the Taliban senseless and get Pakistan onside and rid the government and police of corruption and scrap the idea of secular democracy and women's rights, we just might win - something.

Richards said the battle for the hearts and minds of villagers remains undecided and added that Afghans, "need to have faith in the prowess of the side they back". He added: "They just will not take the risk of backing the wrong side."
Posted by The Mound of Sound at 7:09 AM

Can you imagine if today's "Microwave Generation" were around in the 40's???
Instead of defeating Hitler and Mussolini . . . you would have gotten so disheartened after a few 100 thousand casualties and would have been suing for peace at any cost.
Korea is a perfect example of a job left undone . . . the South vibrant, educated and booming. And the North, a progressive state . . . . starving, despotic and a threat to the region.
It took over 8 years to bring democracy to Japan. The progressives of the day said it was not possible, but history proved them in error.
Today we expect instant results . . . but it may take a decade to put Afganistan on its feet . . . can we hold off the Microwave Progressives that long???