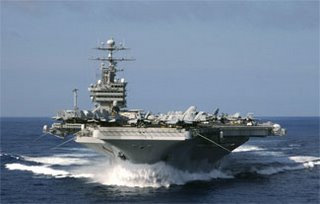 USS John C. Stennis
Foreign papers suggest that the United States, possibly in conjunction with Israel, may be preparing to strike Iran.

A second US aircraft carrier, the Stennis, is expected to arrive on station in the Persian Gulf by the end of the month to join the USS Eisenhower that arrived in December. Spiegel Online noted this ominous fact:

"A buildup of US aircraft carriers in the Gulf has happened five times in the last 15 years: at the beginning of the 1991 Gulf war; leading up to the "Operation Desert Strike" in 1996; prior to "Operation Desert Fox" in 1998; in the spring of 2003; and today. In only one of these cases was a buildup on this scale not followed by a military strike: in early May 1998, when the Iraqi regime temporarily accepted the conditions imposed by the United Nations Security Council.within days."
Today it was reported that Iran has refused entry to 38 IAEA inspectors, apparently in response to sanctions recently imposed on the country by the Security Council.
Meanwhile The Independent reports on the rise of war rhetoric in Israel. The paper reports on hawk Benjamin Netanyahu, leader of the Likud Party, who warned, "No one will come defend the Jews if they do not defend themselves. This is the lesson of history."
Netanyahu told reporters that he doubted the "genocidal regime" of prime minister Ahmadinejad was "deterrable."
Meanwhile Ahmadinejad is digging in his heels in rejecting the UN resolution: "The resolution was born dead and even if they issue 10 more it will not affect Iran's economy and policies."
Posted by The Mound of Sound at 9:54 AM