If Congress Really Wants an End to This War 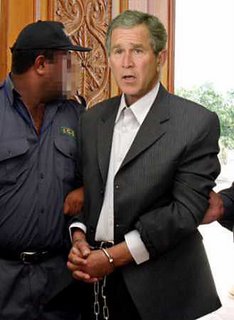 Here's what Congress could do to stop the war, find a way to tax the American people for the existing and ongoing war debt. Progressive taxation - the rich pay most. Work out how much this war is actually costing, including incidental and indirect costs, and apply it to the tax rolls.

After all, why should the country not make some sacrifice to pay for their president's adventure. Why should the White House be allowed to pass these costs, together with accrued interest, onto a generation to come? With the troubles coming down the pike, the next generation is going to have their hands full without having to pay off George Bush's war debt.

Bush would obviously veto it but that wouldn't prevent the Congress issuing tax notices to let each taxpayer know how much he or she is dumping onto those who will follow.

What would happen? I think you could well have a taxpayer (read voter) revolt, one that would cause even Republicans to send an ultimatum to the White House. If that didn't work it would be time to topple a tyrant. There exist ample grounds for impeachment and what better time could there be to send the frat boy and his bald pal into retirement?
Posted by The Mound of Sound at 6:11 PM