We Beat Islam, Hands Down - Conrad Says So. 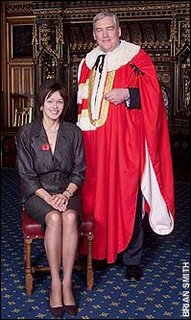 Conrad Black weighs in on the total superiority of Christianity over Islam. From the National Post. Read the rest, if you can.

"Our religious practice is a good deal more spontaneous, intellectually distinguished, and conducive to productive activity and general civility than all but the most unrepresentatively thoughtful versions of Islam. No Islamic leader has a fraction of the moral or intellectual credibility or mere market share of the Pope. Rome and all the West, secular and ecumenical, have seen off more serious challenges than this."

Hey, is that why he was so determined to become "Lord" Black?
Posted by The Mound of Sound at 8:42 AM

*sigh* the your religion is better than my religion rant, another reason why I'm one of those so called "smug agnostics", if Conrad Black hadn't once owned the National post I'm sure this article wouldn't have ever been considered for print.