Why Let the Youngsters Have All the Misery? 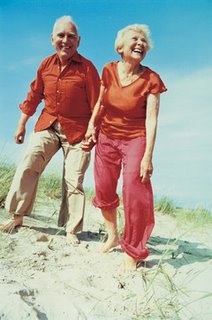 It's Splitsville for Grandma and Grandpa.

A story in the National Post reveals that divorce isn't just for kids anymore:

"This is the new face of divorce: She is a woman in her eighties, married for a half-century, a devoted, seemingly contented wife who one day decides she has had enough.

"There is no secret affair, no mystery lover, no harbouring of a lifetime of abuse or ill-treatment that precipitates the divorce. Rather, the octogenarian divorcee abandons the marriage because she 'could not go on living the same old life, in the same old rut, with the same old boring person.'

"'One woman had been married for 53 years, had never worked outside her marriage, had no idea of how she would survive financially and had just survived an organ transplant," says Deirdre Bair, the author of "Calling It Quits: Late-Life Divorce and Starting Over."

But Grandma, if you go who's going to get the dentures?
Posted by The Mound of Sound at 8:44 AM